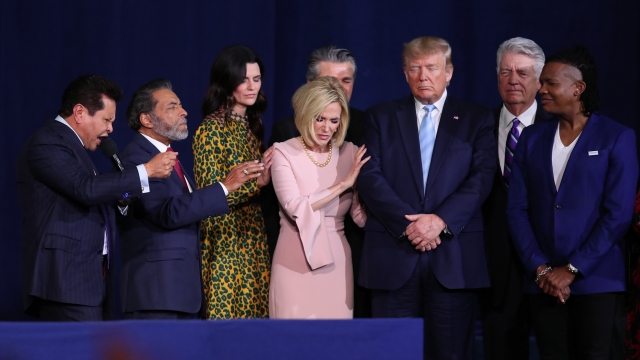 "This afternoon, we're proudly announcing historic steps to protect the First Amendment right to pray in public schools. So you have the right to pray — and that's a very important and powerful right. There's nothing more important than that, I would say."

On Thursday, President Trump issued new guidance on prayer in public schools, saying "the government must never stand between the people and God."

Nine federal agencies, including the Education Department, have also been tasked with reversing what the president called "discriminatory regulations on religious services organizations."

Those regulations were issued in 2016 by the Obama administration. They required federally funded religious social service providers to tell beneficiaries about other faith-based or secular groups offering the same services. The White House argues those rules created an unfair burden that secular groups didn't necessarily have to bear.

In addition, federal agencies would have to ensure federal grants did not disadvantage applicants based on their religion, even in states that specifically ban public money from funding faith-based organizations.

States would be required to notify the Education Department about complaints against a school district over the right to pray. Agency regulations would also ensure that religious student groups and secular groups at public colleges and universities receive equal funds and privileges.

The administration said the rules would "level the playing field" between religious and non-religious groups receiving federal funds, and guard against what President Trump said were efforts by the "far left" to "prohibit religious expression."

The right to pray in public schools is already guaranteed under the law. The Supreme Court banned school-sponsored prayer in 1962, but students are still allowed to pray on school grounds privately.