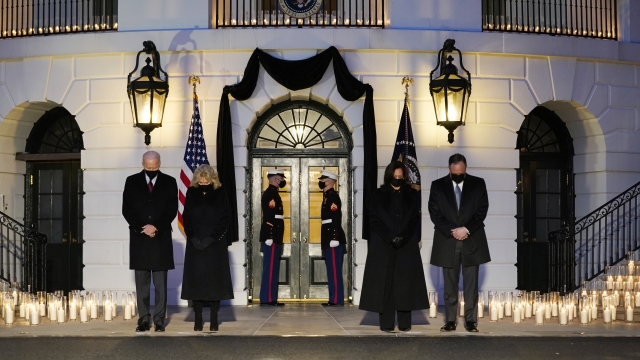 A somber moment at the White House last night. President Biden and Vice President Kamala Harris held a moment of silence for the 500,000 Americans who have died of COVID-19.

Five hundred candles were placed on the steps and balcony.

"As a nation, we can't accept such a cruel fate. While we've been fighting this pandemic for so long, we have to resist becoming numb to the sorrow," said President Biden. "We have to resist viewing each life as this as a statistic or a blur or on the news. And we must do so to honor the dead, but equally important, care for the lives of those left behind."

To grasp the scope of that number, it's more than the U.S. death toll from World War I, World War II and the Vietnam War combined. Even with that context, a half-million deaths can be hard to imagine.

But there are signs that things are turning around. For the third week in a row, the number of deaths from COVID dropped. Deaths fell more than 35% last week.

New cases have also declined and hospitalizations are at their lowest since the first week of November with 55,000 people fighting the virus from the hospital now.