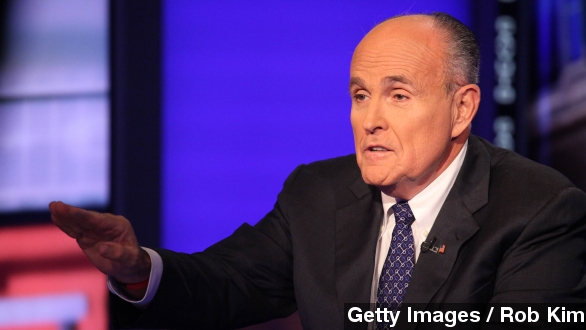 "It's sad to see when somebody who has attained a certain level of public stature and even admiration tarnishes that reputation so thoroughly. ... I think, really, the only thing that I feel is sorry for Rudy Giuliani today," White House Press Secretary Josh Earnest said.

Earlier in the week, the White House used the hashtag #ObamaLovesAmerica in a tweet about national parks, taking a pretty clear jab at Giuliani's comments.

Politico reported Wednesday Giuliani made a comment about Obama's lack of love for America at a dinner event for Wisconsin Governor Scott Walker. Giuliani said he later received death threats for that comment.

Walker, a potential 2016 presidential hopeful, is trying to keep quiet about the issue. On CNBC the next day, he declined to take a stance on the former Mayor of New York's statements.

And on Friday Walker said, "I've never asked the President so I don't really know what his opinions are on that one way or another."

Walker has since been criticized by some who think he should have spoken out against Giuliani's comments both during the event and on CNBC.

A Republican doing that wouldn't be unprecedented — during the 2008 presidential campaign John McCain defended Obama after a supporter said she didn't think she could trust Obama because he was an Arab.

"No ma'am, he's a decent family-man citizen that I just happen to have disagreements with on fundamental issues and that's what this campaign is all about," Senator McCain said.

But other 2016 Republican hopefuls have weighed in on the president's patriotism.

Florida senator Marco Rubio took the high road when discussing Giuliani's comments. According to a statement from his office he told a local TV station, "I don’t feel like I'm in a position to have to answer for every person in my party that makes a claim. ... I’ll suffice it to say that I believe the President loves America; I think his ideas are bad."

"I try not to question the President's motives as being a good American or a bad American," Paul said.

In a statement Louisiana governor Bobby Jindal said, "If you are looking for someone to condemn the Mayor, look elsewhere."

A spokesperson for Jeb Bush said the Florida governor doesn't question the president's motives. Other 2016 hopefuls have yet to weigh in.