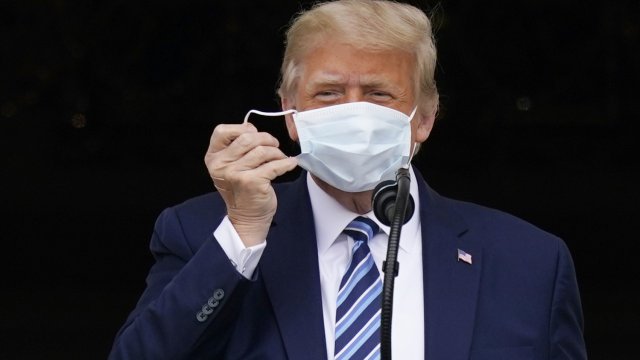 Dr. Sean Conley said the president can stop isolation, but some medical experts are concerned he may still be contagious.

The White House doctor says President Donald Trump can no longer transmit the coronavirus, but medical experts are questioning if it's too early to tell.

In a memo released Saturday night, Dr. Sean Conley said a COVID sample didn't show evidence of an actively replicating virus, meaning the president could end his isolation. Though it wasn't clear whether President Trump had tested negative, Conley said the president had felt better and been fever-free for 24 hours.

The CDC says adults with mild-to-moderate cases can be around others 10 days after the onset of symptoms as long as they have gone 24 hours without a fever. But skeptics say there's no way to know if his transmission risk has completely gone away since his initial diagnosis 10 days ago.

Experts say knowing the president's most recent negative test would help determine when he first became contagious and who he could've exposed in his case's early days.

Some say the time frame given by the White House has been laid out to get the president back on the campaign trail. Just before the memo, he addressed hundreds on the South Lawn Saturday night in his first post-diagnosis appearance, telling them... quote... "I'm feeling great." He's scheduled to hold a campaign rally in Sanford, Florida Monday and is planning trips to Pennsylvania and Iowa on days following.