White House Defends Tweets On Deporting Immigrants Without A Hearing 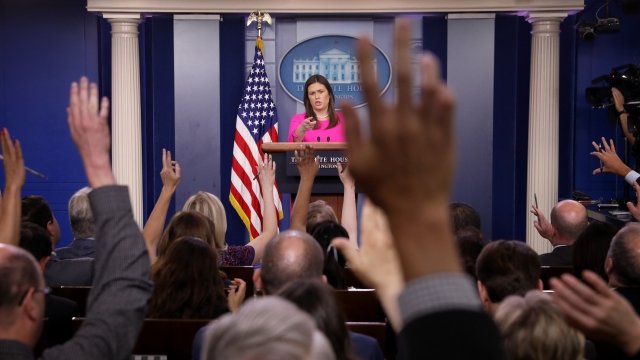 The White House seems to be defending a series of tweets from President Donald Trump that call for undocumented immigrants to be removed from the country faster.

In a tweet Sunday morning, Trump called for immediately returning people who enter the U.S. illegally to their home countries "with no Judges or Court Cases." And he emphasized that point in more tweets Monday, writing, "People must simply be stopped at the Border and told they cannot come into the U.S. illegally."

"Thousands of illegal aliens are removed every month without seeing an immigration judge as a result of procedures in current law, including voluntary removal and expedited removal. Just because you don't see a judge doesn't mean you aren't receiving due process," Sanders said.

Opponents of Trump's tweets say deporting immigrants without a hearing could violate their constitutional right to due process. But it's worth noting U.S. law does allow for expedited removal in certain cases.

Sanders stressed that the president's ultimate goal is a secure border and a revamped immigration system, and she again called on Congress to pass new immigration legislation.