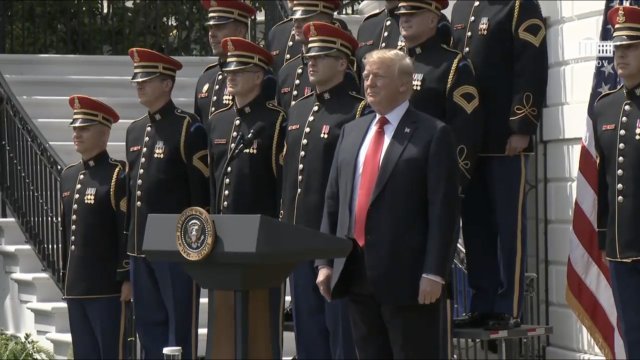 SMS
Trump Hosts 'Celebration Of America' In Lieu Of Super Bowl Celebration
By Austin Kim
By Austin Kim
June 5, 2018
The "Celebration of America" event was announced after the last-minute cancellation of a visit from the Philadelphia Eagles.
SHOW TRANSCRIPT

The Philadelphia Eagles planned to visit the White House on Tuesday for a Super Bowl celebration. Instead, President Donald Trump told them not to show and changed the party's theme.

"We respect our flag, and we always proudly stand for the national anthem," Trump said on Thursday at the "Celebration of America" event.

That was likely aimed at NFL players who protested by kneeling during the national anthem — that's a topic the president has commented on several times, and he mentioned the protests in his initial statement about the cancellation. But Philadelphia Eagles safety Malcolm Jenkins and others have pointed out no Eagles players took a knee during the anthem last season. On Tuesday, the White House also blamed the Eagles for the last-minute cancellation.

"If this wasn't a political stunt by the Eagles franchise, then they wouldn't have planned to attend the event and then backed out at the last minute," White House press secretary Sarah Sanders said.

Many disagree with the president and the White House. The NFL Players' Association said it was "disappointed" with the president's decision. Philadelphia Mayor Jim Kenney went a step further, calling Trump a "fragile egomaniac."

It also looks like there won't be a celebration for this year's NBA champions either, regardless of whether it's the Golden State Warriors or the Cleveland Cavaliers. LeBron James said, "I know no matter who wins this series, no one wants an invite anyway." Warriors guard Steph Curry added, "I agree with 'Bron."