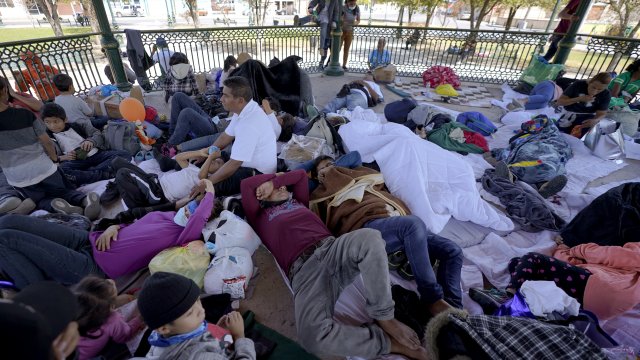 The Biden administration's message on the border: do not come.

“Our message has been straightforward and simple," Secretary Alejandro Mayorkas said to NBC's "Meet the Press." "And it's true. The border is closed. We are expelling families. We are expelling single adults,  and we've made a decision that we will not expel young, vulnerable children.”

A dramatic spike in the number of people trying to get into the United States... causing the White House to face a human crisis at the border, and a political crisis, too.

In February, there were about 19,000 family members encountered at the border-- a 168 percent increase from the month before. There were also about 9,000 unaccompanied children.

That has led to minors being housed in less than ideal conditions at the border awaiting families to take custody of them.

Republicans want to use the pandemic to block migrants and require asylum seekers to remain in Mexico.

"It's going to get a lot worse," Rep. Mike McCaul said. "Springtime, summer, more and more come over. The message is coming back that hey, we got a new president, come on in, we're open for business to the traffickers. And guess what? They’re right here."

The Biden administration says it’s fixing the problem, but the American public isn’t so sure. A Reuters/Ipsos poll finds only 41 percent of Americans support President Biden's handling of immigration.

And while the administration acknowledges the perception that border patrol is more relaxed, they say other factors like hurricane devastation and the toll of the pandemic is contributing to the crisis.