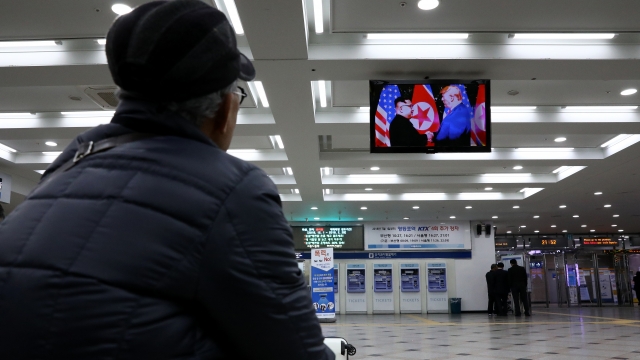 The Associated Press, Reuters, Bloomberg and The Los Angeles Times were barred from the meal following a photo opportunity with the leaders. White House Press Secretary Sarah Sanders said they were banned because they "shouted questions" at President Trump. One question was about whether the president had anything to say about his former attorney Michael Cohen's testimony.

Sanders initially said all print journalists were restricted from the 90-minute dinner. When the journalists — including photojournalists, who were not banned — pushed back, she allowed one Washington Post reporter to attend.

According to The Washington Post, President Trump has previously told aides he feels it is disrespectful for reporters to yell questions while he is with another world leader.

But restricting press at this particular meeting doesn't have great optics. The United States generally protects the rights of the press while the president is overseas, and many view this sudden restriction as retaliation for asking the president questions he didn't want to answer. The fact that he is meeting with North Korea — a country without free press — doesn't help.

The leaders will meet again Thursday before President Trump flies back to the United States.