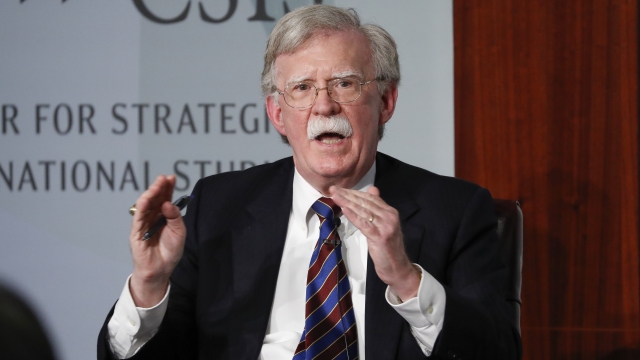 SMS
Whistleblower's Lawyer Is 'Disturbed' Bolton Saved Claims For His Book
By Sasha Ingber
By Sasha Ingber
June 24, 2020
"I have no sympathy for John Bolton if he ends up losing every dollar that he would have made for this book," says attorney Mark Zaid.
SHOW TRANSCRIPT

John Bolton's memoir, "The Room Where It Happened", is filled with depictions of President Donald Trump abusing his power.

Now, a lawyer who represented the whistleblower whose complaint set off the impeachment inquiry is calling out the former national security adviser for waiting to make the claims in a book.

"I have no sympathy for John Bolton if he ends up losing every dollar that he would have made for this book," says Mark Zaid, a national security attorney.

Newsy spoke with Zaid after the government failed in court to block the book’s release. The pages include accounts of President Trump pleading with China's Xi Jinping for reelection help and delaying aid to Ukraine until his political opponents were investigated.

"It's disturbing to me as an American citizen, regardless of my role as the whistleblower attorney, that John Bolton, as the former national security adviser, held on to additional information that would strengthen the allegations against President Trump or bolster or support them," Zaid said.

Instead, Bolton refrained from testifying in the Democrat-controlled House probe, writing it was “impeachment malpractice,” and was blocked as a witness in the Republican-controlled Senate.

Bolton spent four months working with a senior official at the National Security Council to clear the manuscript. Despite being told the text was free of classified information, he never received final approval before going to the publisher.

Other officials who reviewed the book contend it still contains classified information. One of those is political appointee Michael Ellis, who was accused during the impeachment inquiry of moving the rough transcript of President Trump’s call with the Ukrainian president to a highly classified server. The legal battle Bolton faces could potentially become a criminal case.

"Everyone should understand how simple at times it unfortunately is for the government to say what is classified," says Zaid.

The most prominent critic, the president himself, says Bolton should be “in jail, money seized, for disseminating, for profit, highly Classified information.”

A 2009 executive order states foreign government information, relations and activities are categories for classification. But information to conceal violations of law or prevent embarrassment aren’t.

Zaid says the classification review system is full of glitches and gaps — and deeply influenced by the personalities of the people on the inside.

"This case now is the first time we've seen where the government has sued, civilly, before the book has actually been published," he adds. "That's a bad thing for all future authors."