#WhereIsRey Proves Merchandising Needs To Catch Up With Hollywood 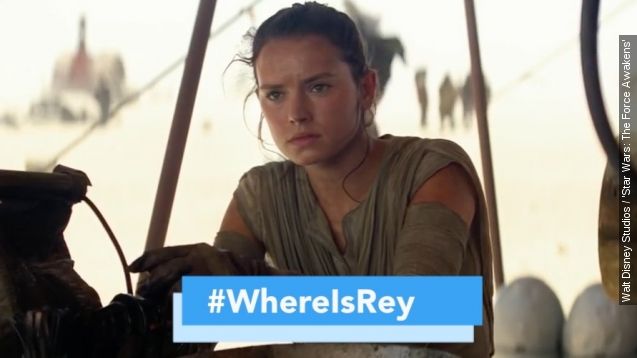 SMS
#WhereIsRey Proves Merchandising Needs To Catch Up With Hollywood
By Eugene Daniels
By Eugene Daniels
January 9, 2016
The main star of "Star Wars: Episode VII" is missing from some merchandise, and people (including the director) are not happy.
SHOW TRANSCRIPT

You gotta love Rey. She's our latest Jedi and further proof the women in Star Wars are more kick-ass than the men surrounding them. And for a new generation, she's giving young girls a great role model to look up to ... unless they play Monopoly. (Video via Walt Disney Studios / 'Star Wars: The Force Awakens')

According to Entertainment Weekly, J.J. Abrams told reporters at a press event, "I will say that it seems preposterous and wrong that the main character of the movie is not well represented in what is clearly a huge piece of the Star Wars world in terms of merchandising." He says he called Hasbro immediately to find out what was going on. (Video via NBC / 'The Tonight Show')

And Abrams isn't the only person peeved with Hasbro either. The #WhereIsRey campaign trended on social media with everyone agreeing on one thing: leaving out Rey is not okay.

But it's not just a missing Monopoly piece. People noticed Rey's absence throughout the record-destroying movie's merchandise. Like this 6-pack of characters from the movie (we got Finn, Kylo, Chewie, Poe and two randos instead). And we can't forget this Millennium Falcon set. Despite her ability to fly it and fix it, Rey's ticket must've been lost in the mail. (Video via Walt Disney Studios / 'Star Wars: The Force Awakens')

To be fair, Rey definitely has some representation in the merchandising. But as the main character, it seems like she should be front and center in every single set.

The omission of females in movie merchandising is nothing new. Gamora, the knife-wielding butt-kicking alien from Guardians of the Galaxy ended up with her own #WheresGamora, after fans found her absence just as irritating. (And don't get us started on Black Widow.) (Video via Walt Disney Studios)

But as more and more female action heroes start popping up and turning a profit all over Hollywood, any relative absence from tie-in merchandising is going to be more glaring. (Video via Lionsgate)

For Hasbro's part, they say Rey will be in the next iteration of the movie's Monopoly game. And that more Rey products will be "hitting store shelves this month." Better late than never, I guess.