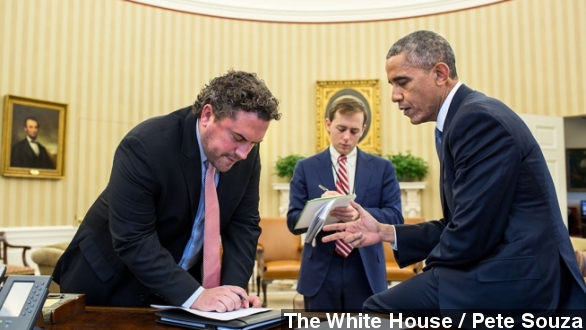 This is it. President Obama's about to make a major policy address that could shield over 5 million undocumented immigrants from deportation through executive action.

As speeches go, this one is pretty significant. Obama's executive action will certainly kick off a partisan fistfight on Capitol Hill and could dictate the tone of Obama's final two years in office. So why aren't the networks showing the speech live on TV?

The president's big address won't be aired by ABC, NBC, CBS or Fox, who've all elected to keep their Thursday night prime-time schedules intact. So fans of "Grey's Anatomy," "The Biggest Loser," "The Big Bang Theory" and "Bones" won't have to worry about any presidential intrusions on their TV time.

But the president's speech is being aired on Spanish-language broadcasters Telemundo and Univison — the latter even co-opted its coverage of the Latin Grammys, a major ratings driver, to air the speech.

"It makes you think about who his audience really is. Maybe he's not trying to persuade the masses. Maybe he's trying to speak to a more niche audience," Stelter suggested.

Politico notes there has been some friction on the issue between the White House and the networks over the announcement, apparently because the president announced his address on Facebook first.

An unnamed administration official complained: "In 2006, Bush gave a 17 minute speech that was televised by all three networks. ... Obama is making a 10 minute speech that will have a vastly greater impact on the issue. And none of the networks are doing it. We can't believe they were aggrieved that we announced this on Facebook."

And a network exec hit back later in the day via Politico's Playbook, calling Obama's speech "overtly political" as opposed to  Bush's "bipartisan announcement" in 2006.

Now, depending on which side of the political spectrum you fall on, this is either a media blackout by the White House to hide the president's executive action from public view, or a shameful dereliction of duty on the part of the networks. But there's a simpler explanation for all of this — ratings.

This week marks the end of Nielsen's sweeps week, and the ratings company is canvassing viewers to determine local ad prices. Everyone wants to put their best foot forward around this time, in an effort to pump up their ratings and ad revenue.

And as Mediaite's Joe Concha puts it: "The president simply doesn't rate like he used to. Call it Obama Fatigue. ... To the networks, not carrying the speech tonight is nothing personal, it's just business.​"

Obama's speech will be aired on cable news networks such Fox News, CNN and MSNBC, as well as on PBS and the White House official website. It starts at 8 p.m. EST.

This video includes images from The White House / Pete Souza.