Where Will It Stop? Oil Drops To 2009 Prices 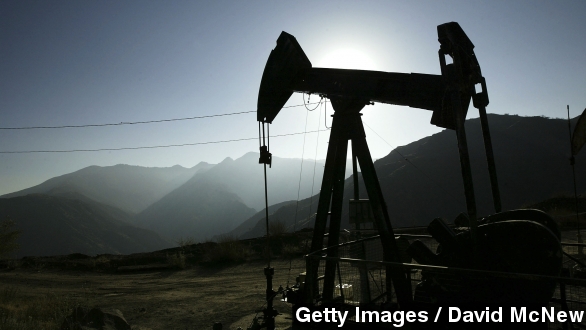 SMS
Where Will It Stop? Oil Drops To 2009 Prices
By Cliff Judy
By Cliff Judy
December 30, 2014
Oil prices dropped to their lowest since May 2009 on Tuesday, prompting how-low-can-it-go questions as OPEC and others refuse to flinch.
SHOW TRANSCRIPT

The low prices came about because of a huge glut in the world's oil supply. Much of that supply in the U.S. has been attributed to fracking of shale oil in areas like North Dakota and Texas. (Video via Journeyman Pictures)

Despite losing billions compared to what market prices were just months ago, OPEC's largest producers haven't flinched or slowed their production to get prices back up. But why? (Video via RT)

Lo and behold, Bloomberg reported Tuesday morning U.S. oil drillers have idled the most rigs since 2012, though fracking operations don't appear to be slowing down so far.

A Tulsa World columnist asked that very question of an online senior gas analyst who didn't appear to give a definitive prediction. Still, he said: "Pretty soon, we probably are going to have more speculators entering the market. We already are starting to see some bets placed on $60 oil. All it would take is a few major banks to buy a million barrels each."

Crude and Brent crude oil prices recovered slightly Tuesday morning to around $53 and $57 a barrel, respectively, but only after they both fell to their lowest prices since May 2009.

Those prices might evoke images of intense limbo competitions or perhaps Ludacris lyrics. Those are admittedly pretty awful how-low-can-you-go jokes, but the question is legit — the nationwide average for a gallon of unleaded is still hovering around $2.27, but sub-$2 gas isn't uncommon right now. (Video via WDTN, YouTube / JCVdude)

Some speculation's centered around muscling out that very competition we just mentioned — U.S. production. The idea is oil-rich countries have enough money in reserves to wait out low prices and make it tough for the competition to profit. (Video via The Telegraph)

As for the how-low-can-prices-go question, the general consensus is not much lower … we think.