How 2020 Candidates Stack Up On Disinformation And Big Tech Policies 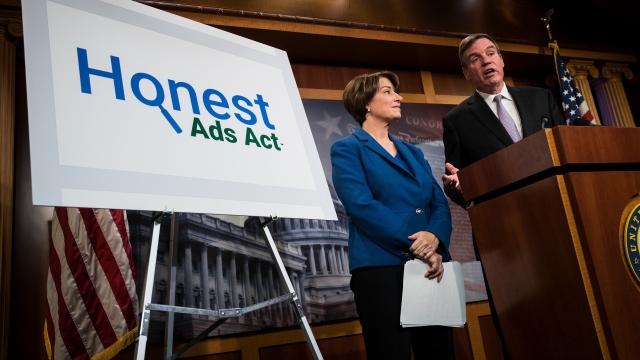 Disinformation racked the 2016 election. But experts say none of the 2020 candidates have a complete plan to combat the problem.

"Nobody's got the full package. They're all trying to make first steps and kind of cobble together what our social media regulations will look like in 2020."

Nina Jankowicz is a disinformation expert at the Wilson Center in Washington.

Who of the people running right now have really robust policies toward disinformation and social media?

"Amy Klobuchar, the senator from Minnesota, has been working on these issues for a long time in the Senate. And she, I think, probably has the most robust policy, although her policy is also, I would say, baby steps," Jankowicz said.

Klobuchar is a sponsor of the Honest Ads Act, a measure that would require platforms to reveal who buys their political ads online. She’s also vowed to invest in media literacy education, and says she’ll require political campaigns to report any foreign interference efforts to federal authorities.

Few other top candidates have drawn up specific plans to address disinformation. Instead, some have set their sights on social media companies, where Russian disinformation found a home in 2016.

"So Elizabeth Warren very famously wants to break up big tech," Jankowicz said. "I think that comes from a more economic standpoint. She thinks that because platforms like Facebook also own WhatsApp and Instagram, that by breaking up those companies, they would be able to micro target things less effectively."

South Bend Indiana Mayor Pete Buttigieg has said that tech companies should be involved in reducing hate and extremism. But Bloomberg reported that Facebook CEO Mark Zuckerberg recommended potential people for Buttigieg’s campaign, leading to questions about where he stands on regulating big tech.

Newsy reached out to the campaigns of Congresswoman Tulsi Gabbard, Senator Bernie Sanders, and former Vice President Joe Biden about their plans to stop disinformation. They didn’t respond for this story. Andrew Yang’s campaign pointed us to a blog post where he vowed to put more responsibility on tech companies and help them detect bots or be penalized.

President Trump, for his part, has downplayed or outright denied Russia’s interference in 2016 and accuses social media companies of discriminating against conservatives.

"A lot of bad things are happening. I have people come up to me and tell me, Sir we want to follow you and they don’t let us on," Trump said.

"I think the Republicans in general take a bit less of a heavy hand than the Democrats do. They seem to not want these regulations that could impose on freedom of speech and finding that balance is difficult," Jankowicz said.

Meanwhile, Klobuchar’s bipartisan Honest Ads Act has been held up in Congress for months.