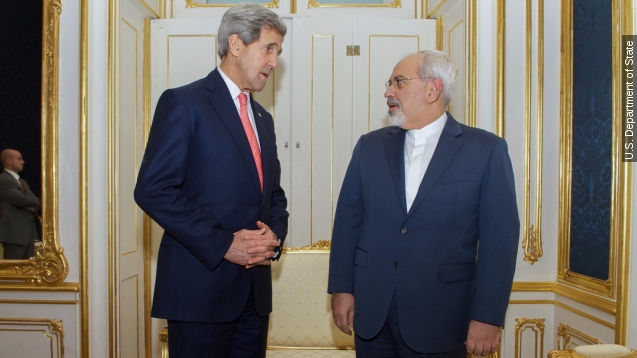 SMS
Where Jailed Reporter's Trial Fits In US-Iran Relationship
By Kate Grumke
By Kate Grumke
May 19, 2015
Iranian news outlets say the trial of Washington Post reporter Jason Rezaian is set for May 26, one month before a nuclear deal deadline.
SHOW TRANSCRIPT

A U.S. journalist held in jail in Iran for more than nine months has finally received a trial date, according to Iranian news outlets.

Washington Post reporter Jason Rezaian and his wife, Yaganeh Salehi, were arrested and sent to an Iranian prison last year in July. The trial date for Rezaian, Salehi and a third unnamed photojournalist is reportedly set for May 26.

Rezaian is a dual Iranian-American citizen, and charges against him include espionage, conspiring with a hostile foreign government and propaganda — essentially sending information back to the U.S. (Video via CNN)

"Do you like it, are you happy here?" CNN's Anthony Bourdain said.

The Washington Post's executive editor said: "The serious criminal charges that Jason now faces in Iran's Revolutionary Court are not supported by a single fact. ... The proceedings against him have been anything but fair and open."

The trial is expected to be closed, although The Washington Post has requested a visa for one of its editors to attend the trial.

The Poynter Institute reports the timing of the trial could be intentional — to precede the deadline for nuclear negotiations. Iranian-American writer Hooman Majd said, "A lot of people could see a trial before [the talks end] as a way to get rid of an issue they have with the U.S. and with the media."

The U.S. has repeatedly called for Rezaian's release, and Secretary of State John Kerry has reportedly brought up the issue multiple times during nuclear negotiations.

"Unfortunately, your friend and my friend Jason is accused of a very serious offense, and I hope he's cleared in a court, but he will have to face a court," said Iranian Minister of Foreign Affairs Mohammad Javad Zarif.

The deadline for a nuclear deal with Iran is June 30. Rezaian's trial is expected to take two to three weeks.

Correction: An earlier version of this video said the deadline for the Iranian nuclear deal was July 30. The video has been updated.