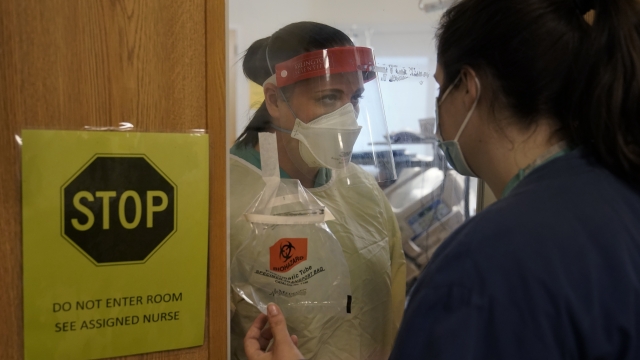 SMS
Where Do Front Line Workers Go For Help With Mental Health Challenges?
By Amber Strong
By Amber Strong
September 13, 2022
Trauma of tragedy, pandemic burnout and long hours may push physicians to need mental health treatment, but stigma keeps them from getting help.

Carl Stokes lives on the east side of Buffalo, New York.

"It's been a lot of talking people down and trying to bring people up," Stokes said.

After a mass shooting took the lives of 10 people at the Tops Supermarket just down the street from his home, the crisis counselor began treating people from his own neighborhood.

"I've come home quite a few times and was a little bit shaken by some of the stories," Stokes said.

Buffalo nurse Trinetta Alston and Dr. Kenyani Davis say it’s the stories from the Tops employees, their patients, that haunt them.

"You start to see how broken the system is on top of all of the health inequities that we have, on top of the structural racism, on top of the inability to help you grow angry, and the most you can do is take a step back," Dr. Davis said. "But every day you take a step back, there's other people that's that's suffering as well. I don't know where the helpers go."

"What would make you think that they don't have feelings, that they're invisible?" Ansari asked.

It was Fred Rogers who famously said, "Look for the helpers." But what happens when the helpers need help?

The onslaught of both the pandemic and gun violence has mental health professionals trying to figure out ways to get resources to the people on the front lines.

A 2021 report from the Physicians Foundation found 55% of physicians say they know a fellow doctor who has considered, tried or had a death by suicide.

"That historical separation of the 'work stress' and the 'home stress' has become artificial now, and you're seeing lots of folks experiencing both," said Dr. Bernard Chang, vice chair of research at Columbia University Department of Emergency Medicine.

According to a survey from Trusted Health, 60% of nurses say they would be afraid to share feelings of depression or suicidal thoughts with a colleague — the main reason being concerns about confidentiality.

Dr. Chang is both an ER doctor and a psychologist and heads up Columbia University’s research on physician burnout. He says stigma keeps fellow physicians from seeking help.

"Documentation, burden, fear of loss of control over your schedule as being some of the primary drivers of clinician burnout or people leaving the field," Dr. Chang said. "I think that as system administrators, we really need to be aware about that and take those voices into account as we think about strategizing about the most efficient health care design."

The study calls on employers to create an environment open to talking about mental health.

"We have this cultural mindset of being above the fray and also being just immune to some of the stresses that we see, and I would say it's OK to be vulnerable, it's OK to seek help," Dr. Chang said.

Back in Buffalo, Alston says she has taken advantage of some of her company’s mental health exercises and finds them helpful. She also finds strength in remembering her purpose and that she’s only human.

"This is what I asked for," Alston said. "I didn't ask to be rich. I didn't ask to make $40 an hour. I didn’t ask for none of that. I asked God to let me show love that was shown to me, and where but in your community can you do that?"