Where Did The World Trade Center Shipwreck Come From? 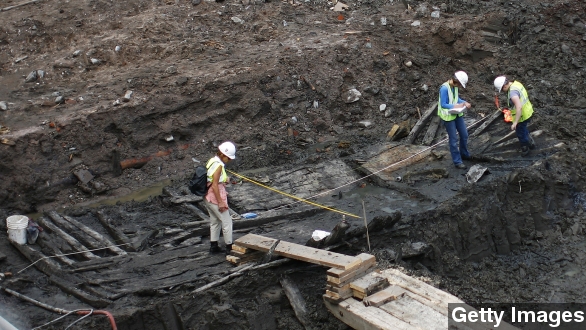 SMS
Where Did The World Trade Center Shipwreck Come From?
By Amy Kluber
By Amy Kluber
July 31, 2014
Scientists say a ship remnant discovered underneath Ground Zero dates back to the 18th century. Why it sank is still uncertain.
SHOW TRANSCRIPT

An apparent shipwreck found beneath Ground Zero. The story was fascinating enough from the start — and now we know just how old it might be. (Via Getty Images)

Archeologists say the remnants found four years ago are more than 200 years old.

In 2010, construction workers excavating a lot for a parking garage near the former World Trade Center site discovered the 32-foot long piece of a ship about 20 feet below street level. (Via NY1)

And now we know some pretty interesting details.

Scientists from Columbia University studied the tree rings from the oak used in the ship to determine its origins. (Via BioOne)

They say the wood matches the same wood from a forest in Philadelphia dating back to about 1773, right before the Revolutionary War. (Via News 12 Long Island)

They also suggest it's the same type of wood used to build Independence Hall. (Via Rdsmith4 / CC BY SA 2.5)

Researchers still don't know for sure why the ship sank — whether it was by accident or deliberately used for landfill to expand the island of Manhattan as we know it today.

Two researchers tell The New York Times they think it was probably the latter — pointing out sawed-off beams that could indicate it was purposely sunk.

But the scientists do know, based on artifacts taken from the ship, it was used for carrying Dutch passengers and cargo over shallow water. (Via  WNYW)

And LiveScience cites previous studies that said it might have even traveled as far as the Caribbean for trading — where scientists say it was affected by a form of "shipworm" that might have contributed to its demise.

Archeologists have also found many other artifacts while excavating Ground Zero. They say discovering the ship and its origins helped them date those other artifacts.