When Will Kids Have A COVID-19 Vaccine? 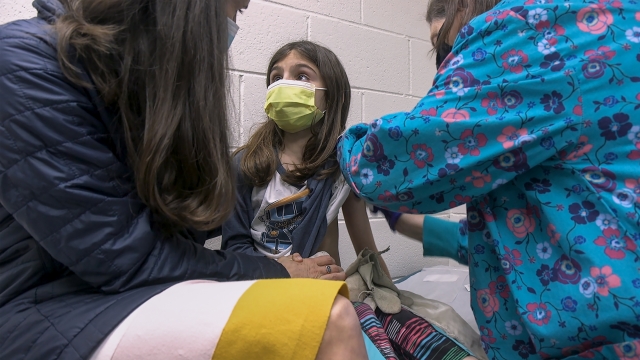 SMS
When Will Kids Have A COVID-19 Vaccine?
By Lindsey Theis
By Lindsey Theis
March 31, 2021
Drug makers are predicting children could be vaccinated before the beginning of the school year but some experts say that's overly optimistic.
SHOW TRANSCRIPT

Researchers test vaccines in adults first, then typically move down the age brackets and that includes Moderna and Pfizer. AstraZeneca is now testing its vaccine in children as young as six months and Johnson & Johnson plans to extend trials of its vaccine to young children too.

Dr. Susanna Naggie counts her twin daughters through their first dose of a Pfizer shot. The nine-year-olds are among fewer than 150 children in the Phase 1 trial for kids 12 and younger.

"It was exciting, but also a bit nerve wracking and scary for the first part, but it's really easy," said Marisol Gerardo, her daughter and a Pfizer trial participant.

“This is Lois and she’s seven weeks. And this is Charlotte. She turned two on Tuesday.”

Rachel Gurthie, a nurse, chose to get vaccinated during pregnancy, passing on antibodies to her newborn. Her two-year-old daughter and three-year-old son are among the first 750 children to get the Moderna vaccine.

When will that normal arrive?  Or at the very least, when will a vaccine come for kids?

Pfizer hopes to start vaccinating children ages 12 to 15 "before the start of the next school year. Johnson & Johnson said in early March vaccines for children under 18 could be available by September. But pediatric experts say wide child COVID vaccinations won’t happen until next year at the earliest.

"There won't be vaccines for all children for this fall. The timeline isn't isn't there to to have them tested and available. But hopefully by the beginning of 2022 there will be vaccines," said Dr. Richard Besser, CEO of Robert Wood Johnson Foundation, a pediatrician and a former CDC director.

Since many of the COVID vaccines have been shown to be safe and effective in adults, the FDA won’t require such a large trial for kids. What remains to be seen — how willing parents will be to sign up their kids for shots.

"Whatever the new normal is going to be, I want us to get there," Gutherie said.

The vaccination of children plays a huge role in the quest for herd immunity too. Experts have said that about 75-80% of Americans will need to be vaccinated to achieve it. Children make up about a quarter of the population, and it’s unlikely that every adult American will get the COVID-19 vaccine.