When Will Bomb-Sniffing Locusts See Action On The Battlefield? 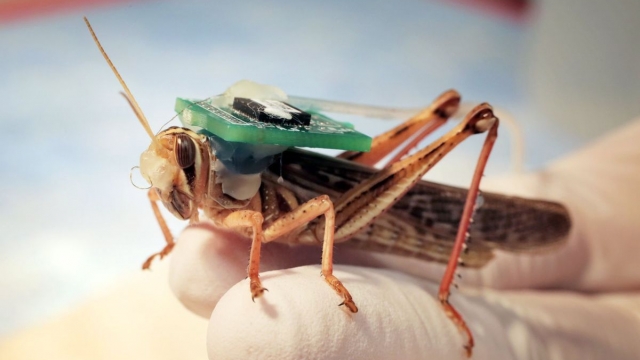 SMS
When Will Bomb-Sniffing Locusts See Action On The Battlefield?
By Terace Garnier
By Terace Garnier
August 26, 2020
A team at Washington University in St. Louis have discovered a way to use a locust’s nearly 50,000 sensors to detect TNT.
SHOW TRANSCRIPT

There may be a new army of bomb detectors hitting the battlefield within the next ten years…. and no… it’s not a machine….. or a dog………

it is something much, much smaller

"I think it'd be hard to control a bug versus a dog where we can have them on a leash. But I think if they were able to have it where they could, I think it would definitely help where we could be like a backup. And we have the dogs and it would save dogs and save lives as well,“ Rhoad said.

"It's important because if you have convoy or anyone that's going out, we go ahead of them to clear the road. way that way, there's no explosives on the road. Or if they do find one, they can have an alternate route to keep all the other troops safe,” Rhoad said.

A team of scientists at Washington University in St. Louis have discovered a way to use a locust’s nearly 50,000 sensors to detect TNT in controlled environments.

“What we do is we make a small incision between the two antennae to antennae insects on the head sticking, sticking up,”  Biomedical Engineering Professor Barani Raman said.

They attach a chip to the insect’s brain…. so….once the locust senses chemical explosives, its brain sends out certain signals  which are then captured and sent to a main computer.

"The more difficult challenge is actually what to ensure protecting the animal or the organism here, and ensuring that it goes to the region we are interested in sensing, and making sure that this interface with engineering and biology is functional and consistent on the order of weeks and days and months,” Raman said.

Raman says they have designed mini backpacks to protect the chip.

“There are advantages and disadvantages for each of them. So we cannot again, behavior is much more difficult to understand at all costs. We don't know whether its the sensors or something else,”  Raman said.

So how would they compare to a military working dog?

Let’s put it into perspective. Military working dogs can work up to twelve years before retiring. Locusts can live up to a few months.

Dogs are big. These bugs are small, meaning they can fit in spaces this k-9 would not be able to reach.

Dogs are easy to control by their handlers.

Locusts are much more unpredictable.

The office of naval research has awarded over a million dollars in grants to fund professor Raman’s research. But he says they have many years to go before these locusts see any action downrange. Terace Garnier. Newsy. The Pentagon.