When Should News Outlets Name A Shooter? 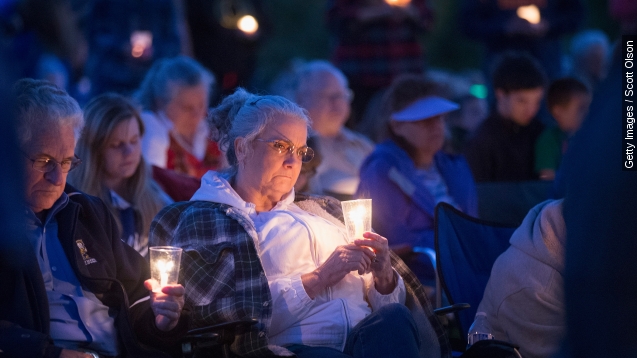 In the ongoing debate over whether to name the perpetrator in a mass shooting, one thing is clear: It's not an easy decision.

"You will not hear anyone from this law-enforcement operation use his name," Douglas County Sheriff John Hanlin told a press conference.

Fox News Anchor Gretchen Carlson echoed the sentiment, announcing, "We here at the real story have decided also to not say the suspect's name."

In contrast, CNN's Don Lemon said, "We are news of record, and we must identify him because that is our job."

Some police departments have decided not to name perpetrators of mass shootings. And they've asked the media to do the same. (Video via KVAL)

"I continue to believe that those media and community members who publicize his name will only glorify his horrific actions," Hanlin added.

But Poynter Institute ethicist Kelly McBride argues it's important to name the shooter: "Journalists would be better off promising to use the name responsibly to tell the stories of the victims completely." (Video via Idaho Public Television)

And that's what shooting victims' advocates are asking for.

"This is exactly what we want to see happen when the media covers a mass shooter. They're looking for notoriety," advocate Sandy Phillips told MSNBC.

But not all shooters are copycats or looking for notoriety.

The men who carried out mass shootings in Tuscon, Arizona, in 2011 and at Virginia Tech in 2007 were driven by paranoia and violent impulses, compounded by acute mental illness. (Video via ABC, WTVR)

And even for those who are copycats, The Washington Post's Erik Wemple argues, "Journalists cannot make their calls based on notions that may be swimming in the minds of the insane."

There's also the argument that the sheer number of mass shootings condemns their perpetrators to anonymity. There have been close to 300 mass shootings in 2015 alone. How many names do you remember?