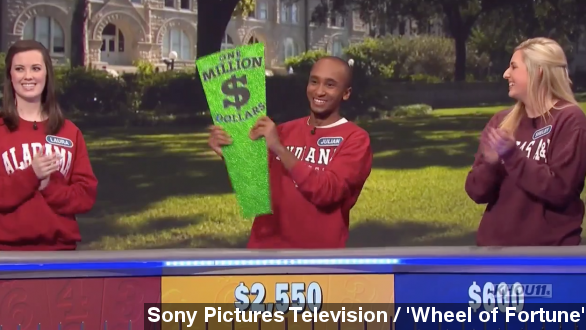 SMS
'Wheel Of Fortune' Contestant Flubs Easy Answer, Loses $1M
By Megan McLeod
By Megan McLeod
April 14, 2014
A contestant on Wheel of Fortune was so close to nabbing some great new prizes, but fell short on some easy answers — multiple times.
SHOW TRANSCRIPT

We've all see game show fails, but this million-dollar mistake from "Wheel of Fortune" might top the list.

Hollywood Take reports Indiana University student Julian Batts had just landed on $1 million and a trip to London when he flubbed Achilles' name.

This wasn't Batts' only mistake of the night, though. He made two more funny errors, to the delight of viewers everywhere.

Despite these missteps, the "Today" show says Batts still managed to win more than $11,000 and make it to the bonus round. (Via NBC)

As you can imagine, social media lit up following Batts' game show debut.

Mamamia tweeted: "Are you having a bad day? The world's worst game show contestant will make you feel better." (Via Twitter / @Mamamia)

And Dustin Nielson said, "This could be the most epic fail in the history of Wheel of Fortune." (Via Twitter / @nielsonTSN1260)

Epic fail or not, Batts told ABC landing a spot on the game show is one of his biggest accomplishments so far.