Here's The Rundown On NAFTA Ahead Of This Week's Negotiations 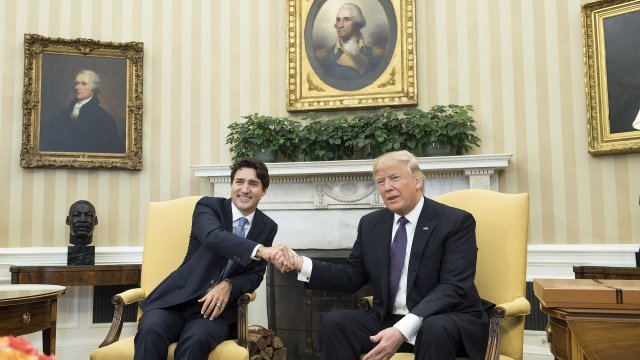 Renegotiations for the North American Free Trade Agreement, or NAFTA, are set to begin Wednesday. Here's what you need to know about the deal.

NAFTA eliminates taxes on imports and exports and eases trade restrictions between the U.S, Canada and Mexico. It went into effect in 1994.

The agreement was the first in U.S. history to let a wealthy country and a poor country trade on even footing.

Related StoryIf The US Leaves NAFTA, That Could Cost Avocado-Lovers

President Donald Trump argues the deal encourages manufacturing jobs to relocate to Mexico where products can be produced more cheaply. He's called it one of the worst trade deals ever made.

Trump says he hopes to reduce the large U.S.-Mexico trade deficit. It was $63 billion last year.

Trump wants to negotiate terms he thinks are more favorable to the U.S. and fulfill his promise to bring back manufacturing jobs.

But Mexico supports NAFTA's elimination of tariffs and has threatened to stop cooperating with the U.S. on migration issues if the renegotiations result in new taxes.

Canada is also a fan of NAFTA but would like to modernize the deal by updating technology regulations and adding new provisions on the environment and gender equality.

U.S. Trade Representative Robert Lighthizer says the negotiations could serve as a model for future bilateral trade deals with other nations. There's no deadline to wrap up renegotiations.