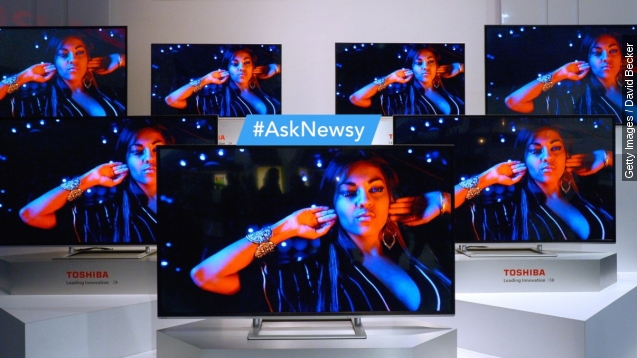 SMS
What You Really Need To Know About 4K Vs. 1080p TVs
By Leah Becerra
By Leah Becerra
November 4, 2015
The difference between a 1080p TV and a 4K TV is noticeable. But you might have a hard time finding stuff to watch to get the full 4K experience.
SHOW TRANSCRIPT

Here's a question: What's the difference between 4K, 1080p and all the other resolution stuff?

This is a whole lot easier to explain with some visual aid, so let's just skip straight to that.

Yeah, the 4K video looks a lot better up close. But most people don't sit two feet away from their home TV screens, so these differences aren't nearly as noticeable from a normal viewing distance. (Video via Samsung)

The reason the gaps are more apparent up close in the 1080p picture is partly because there are flat-out fewer pixels — the little RGB dots of light that make up the picture. When there are fewer of them, the picture might not look as nice, especially on larger TVs. (Video via Samsung)

These facts aside, if you're not watching 4K-quality footage on your 4K TV, you might as well just be looking at a 1080p TV. In other words, the TV only looks as good as the quality of video you're feeding to it. (Video via Apple)

And right now there's not a whole lot of 4K video out there. But, like 1080p before it, that doesn't mean 4K won't eventually be the norm. (Video via Vizio)