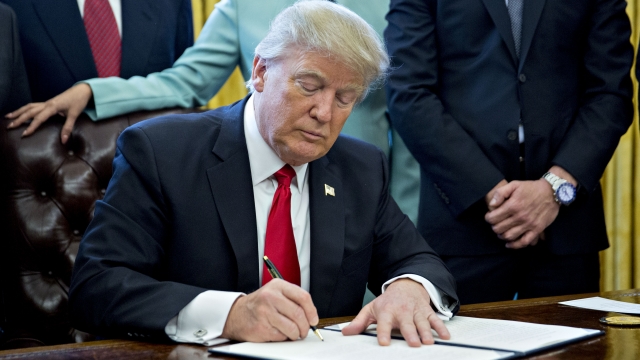 Depending on what side of the political world you're on, executive orders can be scary or really exciting. But the one thing they aren't is unusual.

First, what exactly are they? Executive orders are a type of executive action. There are also presidential memorandums, directives and proclamations.

But executive orders, or EOs, usually get the most attention because they are the most formal. They are a statement from the executive branch to federal agencies on how they should utilize their resources, interpret and then carry out laws already on the books.

Executive orders are legally binding and carry the full weight of the law. They're the most powerful tool a president has in his kit.

The first question most people have is this: Are executive orders spelled out in the Constitution? Well, sort of. You won't find the phrase "executive order" anywhere in our founding documents. We checked.

But our Founding Fathers did use Article II to grant the president "executive power," which seems to have been purposefully vague. Presidents have interpreted it to mean they can dictate how federal agencies use resources.

Still, because we have that whole "checks and balances" thing, Congress and the courts can fight executive orders.

Congress can pass a law that nullifies any order. That essentially tells the president his executive power does not cover whatever the order did.

And because executive orders carry the force of law, they are subject to judicial review. That means courts could strike them down or stop federal agencies from enforcing them.

Executive orders are controversial because they can look like a president is circumventing the process and making his own laws. And whether it's for better or worse, our newest president takes office at a time when the power of the president's pen has never been more expansive.