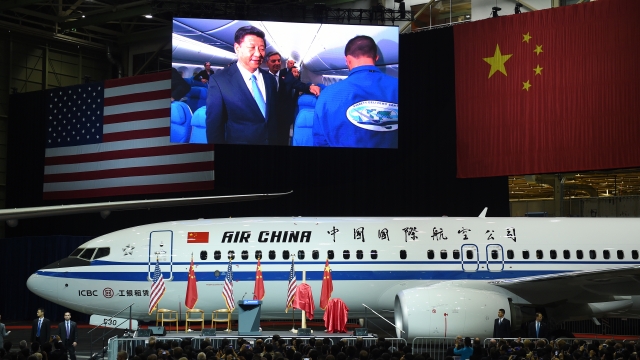 The trade war with China is accelerating anew as President Trump says he's imposing a new 10 percent tariff on $300 billion in Chinese goods. So how might China respond?

Chinese Foreign Ministry spokeswoman Hua Chunying made it clear Friday that "China will have to take necessary counter measures to resolutely defend its core interests." She added: "We don't want to fight, but we aren't afraid to."

This is what that fight might look like: It starts with the Chinese currency, the yuan, which dropped in valuation Friday against the dollar.

Analysts say China could further devalue the yuan. That would make its exports cheaper, potentially warding off the toll of U.S. tariffs. But that comes with a risk: A similar move in 2015 led to accusations of a Chinese currency war, which shook global confidence in the Chinese economy.

Another option could be restricting commerce with American multi-national companies. For starters, the Chinese market is huge for the iPhone and other Apple products. And now surveys suggest a new wave of patriotism may be pushing Chinese consumers towards domestic smart phones such as Huawei.

China could also cancel or curtail orders from Seattle-based Boeing, which has Chinese orders for 478 of its currently grounded 737 MAX passenger jets.

Meanwhile China can make life complicated for FedEx, in an ongoing probe of the U.S. delivery firm over alleged mis-routing of Huawei shipments, for which FedEx has apologized.

In reality, China's options may be slim. It has already retaliated by hiking import fees on $110 billion in U.S. goods after the Trump administration earlier imposed 25% tariffs on $250 billion in Chinese products. Analysts say that may only leave $10 billion in U.S. imports to target.

President Trump said Friday that he is ramping up pressure over China's failure to accede to his demands in a trade deal.

"Somebody should have done this with China a long time ago...300 billion worth of goods and products being sold into our country. The 10 percent is for a short-term period and then I can always do much more or I can do less, depending on what happens with respect to a deal."

The president insists the trade war isn't costing U.S. consumers - it's costing China. But the tariff fight has put a dent in the U.S. stock market. Analysts say American farmers are losing global market share for soybeans and corn. And a March study by the U.S. Chamber of Commerce says the dispute could ultimately cost the American economy $1 trillion, with disproportionate impacts on U.S. manufacturers relying on imports from China.