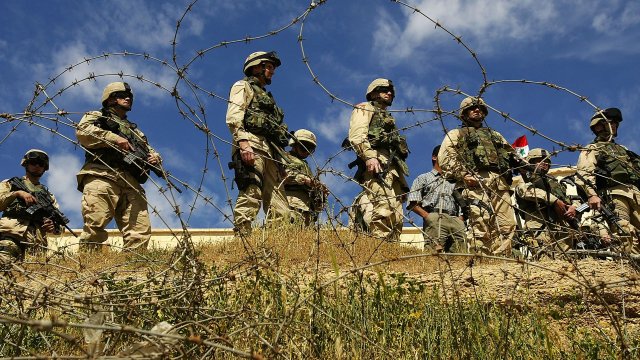 SMS
What We Know About The Additional US Troops Going To The Middle East
By Briana Koeneman
By Briana Koeneman
June 18, 2019
Outgoing acting Defense Secretary Pat Shanahan has authorized approximately 1,000 additional forces to the area for "defensive purposes."
SHOW TRANSCRIPT

The U.S. is sending more troops to the Middle East as tensions with Iran continue to escalate.

Here's what we know about those troops:

Shanahan said in a statement Monday they'll address air, naval and ground-based threats in the Middle East. He didn't elaborate on the type of troops being deployed.

Shanahan said the move is meant to ensure the safety and wellness of American military personnel and "to protect our national interests." And he made a point to say the U.S. isn't seeking conflict with Iran — a sentiment that Secretary of State Mike Pompeo emphasized during a press conference Tuesday.

"Communicating to Iran: We are there to deter aggression. President Trump does not want war," Pompeo said.

Earlier this week, Pompeo said the U.S. doesn't want a war with Tehran, but that it's "considering a full range of options," including a military response.

The U.S. has blamed Iran for a series of attacks against American and allied interests in the Middle East, including what Pompeo called a "blatant assault" on two oil tankers last week, which Iran has vehemently denied.

The Trump administration has approved sending roughly 2,500 forces to the Middle East. But according to multiple reports, officials have considered deploying anywhere between 6,000 and 120,000 more troops to the region.