What We Know About The Officer Who Shot Tamir Rice 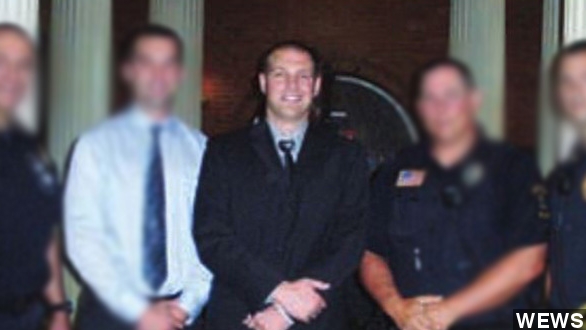 SMS
What We Know About The Officer Who Shot Tamir Rice
By Madison Burke
By Madison Burke
December 3, 2014
Timothy Loehmann, 26, graduated from Cleveland's police academy in March after being nearly fired for lack of maturity in Independence.
SHOW TRANSCRIPT

It's been nearly three weeks since a Cleveland police officer fatally shot 12-year-old Tamir Rice, who was reportedly waving a BB gun at a local park.

The case has added to the tension between law enforcement and minority communities that we've seen nationwide over the past couple months.

Now we're learning more about the officer at the center of Cleveland's controversy, Timothy Loehmann — and it could have a big effect on public opinion surrounding the shooting.

We know he graduated from Cleveland's police academy in March after leaving the Independence, Ohio, police force, where he had worked since 2012.  (Photo Via Cleveland Police Department)

WEWS acquired his personnel file from the Independence police, and it shows when Loehmann resigned, he was in the process of being terminated.

In a memorandum, the Independence deputy police chief wrote that Loehmann had an emotional breakdown during live range training and said he believed Loehmann lacked the maturity needed to work for the department.

Fred Loehmann spoke to Cleveland.com this week and said his son has been doing "pretty well" since the incident and has been socializing and attending church.

He also told the outlet his son believes he acted properly and that he did not know the boy's gun was a toy.

Police say Timothy Loehmann called for Tamir to drop his gun three times before he opened fire. Surveillance video shows him shooting within seconds of emerging from his vehicle.

Loehmann is on administrative leave while police investigate the shooting.

This video includes an image from the Cleveland Police Department and Thomas Hawk / CC BY NC 2.0.