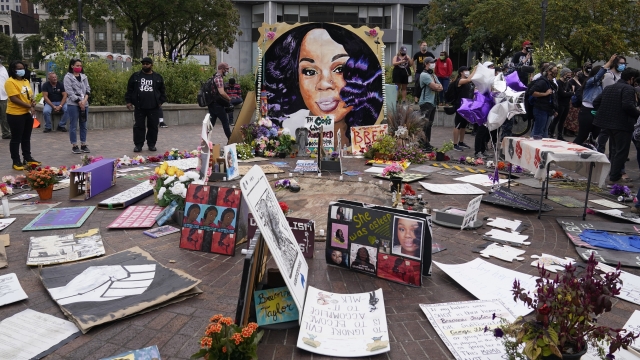 SMS
What We Know About The Last Moments Of Breonna Taylor's Life
By Peter Hecht
By Peter Hecht
September 23, 2020
Breonna Taylor and her boyfriend were in her bedroom when there was pounding on the door. What happened next ignited a firestorm.
SHOW TRANSCRIPT

On March 13, when Louisville police officers came to her apartment door with a search warrant and a battering ram, Breonna Taylor was a 26-year-old emergency room technician.

It was after midnight. Taylor and her boyfriend, Kenneth Walker, were in the bedroom when Walker said he heard pounding on the apartment door. What happened next would ignite a nationwide firestorm.

This is what we know. The police had a warrant that allowed them to enter Taylor’s apartment. The three plain-clothes officers were investigating two men for allegedly selling drugs at a different residence, 10 miles away.

Police said they believed one of those men - a former boyfriend - had packages shipped to Taylor’s home. Taylor was named in the search warrant. Her new boyfriend, Walker, was not.

Walker said he and Taylor left the bedroom and headed toward the entryway when they heard a commotion. He had a gun, which he legally owned.

He would later tell police that he thought the former boyfriend was breaking in. When officers smashed the door off its hinges, he fired a single shot.

One officer was hit in the thigh. Another, Det. Brett Hankison, fired 10 rounds into the apartment. The aftermath is captured in news video and police photos.

“911. Operator Harris. What is your emergency?”

“Uh, I don’t know what happened. Somebody kicked in the door and shot my girlfriend.”

She died in an apartment hallway. Police didn’t find any drugs.

Walker says officers didn’t announce themselves before entering. The police say they did.

Louisville police fired Detective Hankison. An interim chief accused him of “blindly” shooting into the apartment, in conduct he called “a shock to the conscience.” A grand jury indicted him Wednesday on three counts of wanton endangerment.

The department has settled a civil suit with the Taylor family for $12 million and promised extensive policing reforms. Among those already adopted: an end to no-knock warrants.

Taylor’s family and supporters say there is no justice until all of those responsible for knocking down her door and taking her life are held accountable.