What We Could Learn From Comet 67P's Sinkholes 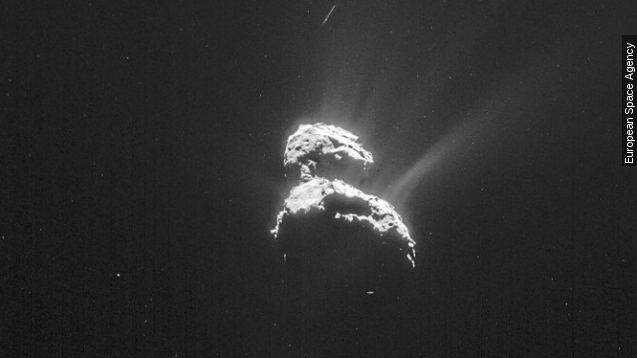 SMS
What We Could Learn From Comet 67P's Sinkholes
By Evan Thomas
By Evan Thomas
July 2, 2015
Rosetta, which has been studying comet 67P/C-G, has spotted sinkholes on the comet's surface.
SHOW TRANSCRIPT

The tails of comets are made up of dust and gas ejected as the nucleus circles the Sun. (Video via NASA)

Now, for the first time, the orbiter studying comet 67P/C-G, Rosetta, has figured out where these gases are coming from: sinkholes. The largest of these pits could be more than 650 feet wide and deep. (Video via European Space Agency)

Researchers think the sinkholes might form the same way they do here on Earth: the material under the surface gets eroded until the ground collapses into the hole. (Video via WFMZ)

in 67P’s case, this could happen specifically through sublimation, where ice under the surface heats up and erodes its surroundings.

Or the pits could be the result of low-velocity impacts early in the comet’s formation.

Or it could be space slugs. You never know. (Video via 20th Century Fox)

One of the researchers writes: “Regardless of the processes creating the cavities, these features show us that there are large structural and/or compositional differences within the first few hundred metres of the comet’s surface.”

The team says they should be able to use the pits to determine how old and weathered specific regions of the comet are.

And over the next month there should be even more opportunities to measure the active pits. Sublimation activity on the comet will peak when 67P/C-G makes perihelion, or its closest approach to the sun, in mid-August.

This video includes images from the European Space Agency and Iwan Gabovitch. Music by Suplington / CC BY NC SA 3.0.