What We Can Decode From The First 'Snowden' Teaser Trailer 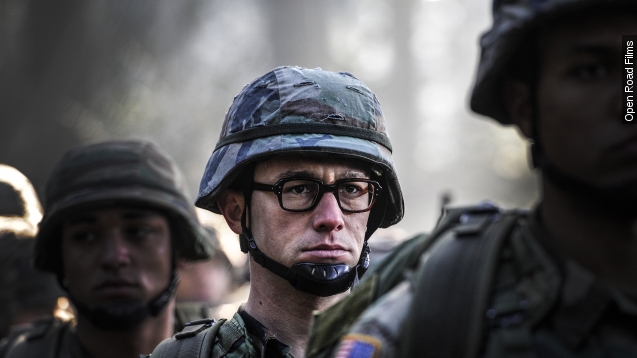 The entire trailer is a combination of different angles of the American flag and a list of Snowden's jobs leading up to his whistleblowing scandal.

For a movie that has quite the all-star cast — including Joseph Gordon-Levitt, Shailene Woodley, Zachary Quinto and Nicolas Cage — it's a bit of a letdown to not see any of them in the trailer.

The film, set to release Christmas Day, is based on two books: "The Snowden Files: The Inside Story of the World’s Most Wanted Man" and the yet-to-be-released "Time of the Octopus," written by Snowden's Russian lawyer.

It's not surprising the trailer lacks any footage, though. The film only recently finished shooting around the world.

But even without footage, the trailer's simplicity coupled with a dark remix of "This Little Light of Mine" manages to create a sort of dramatic intensity.

Which could be a good thing because it has to live up to a recent Oscar-winning documentary on Snowden.

The film won an Oscar for Best Documentary, Feature and 43 other awards.

"Snowden" will surely make more than "Citizenfour," but it'll be interesting to see how the film fares against other Christmas Day releases, like the Will Ferrell-Mark Wahlberg comedy "Daddy's Home" and "Joy," which reunites Jennifer Lawrence, Bradley Cooper and their "Silver Linings Playbook" director, David O. Russell.