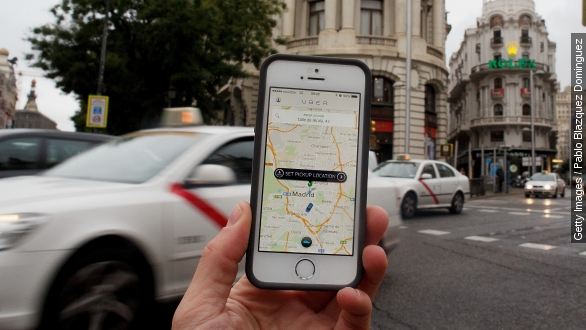 SMS
What Uber Wants With Nokia's Mapping Service
By Evan Thomas
By Evan Thomas
May 8, 2015
Control the cloud-based mapping and you control an important chunk of the nascent autonomous vehicle industry.
SHOW TRANSCRIPT

When it comes to the automotive industry, maps are big business.

It joins a short list of prospective buyers, which includes an alliance between BMW, Audi and Mercedes-Benz.

Here licenses its mapping data to everyone from Microsoft's Bing and Facebook to Garmin and Amazon, and maintains apps for a wide range of smartphone platforms. (Video via Nokia)

Here is also widely used in built-in automobile navigation systems. The company says its software holds some 80 percent of that market.

It's thought in the near term, Uber could use Here to cut its dependency on Google Maps. (Video via Uber)

And more broadly, mapping services are expected to play a critical role in the development of autonomous vehicles — for Uber and for everyone else.

"There are going to be self-driving Ubers, right? So they want to get the best possible mapping system?" asked Bloomberg's Bob Ivry.

Regardless of who designs or owns the software, robotic vehicles would need both big-picture overviews of routes and down-to-the-second data about their immediate environment. (Video via Google)

Access to that kind of map data would provide a huge early advantage for anyone making autonomous vehicles. One insider told The Wall Street Journal carmakers won't want to let someone else drive off with it. (Video via Mercedes-Benz)

"The greatest threat to the automobile industry would be if Google developed an operating system for self-driving cars and made it available free to everyone."

It's not clear how Uber's rumored offer might proceed. None of the companies involved — Uber, the automakers or Nokia — have commented on the news of a bidding war.

This video includes images from Christian Jensen / CC BY 2.0 and Getty Images.