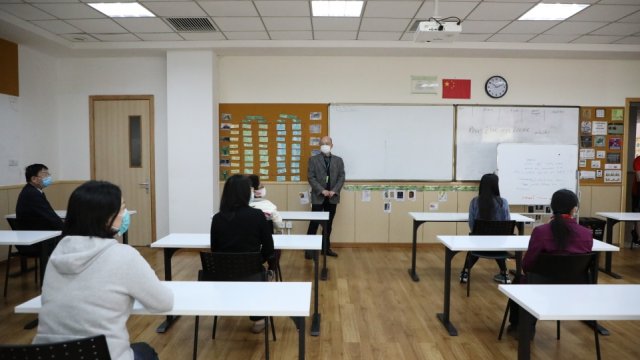 SMS
What Other Countries Can Teach U.S. Schools About Reopening
By Austin Kim
By Austin Kim
May 26, 2020
The slow reopening of schools around the world offers the U.S. a template to work from when, or if, in-person learning resumes in the fall.
SHOW TRANSCRIPT

Emily Benoit works at YK Pao School, located in Shanghai. In-person classes have been in session since April 27.

"Obviously everyone is wearing masks when they're around on campus," said Benoit, the school's Director of University and Careers Counseling. "Students have to have their temperatures taken three times a day and we have to report that information as well.

She says some students returned to class sooner than others. Those who had to take standardized tests were among the first to come back. The school also purchased thermal imaging machines to read people's temperatures. All this at the direction of the Chinese government.

"We're just sort of told what to do and have to sort of follow suit from there," Benoit said, adding government direction gave the school a clear idea for reopening.

So far it's working. YK Pao has no new coronavirus cases. But if there was a cluster, Benoit says she's confident the school would start contact tracing.

China is not the only country where uncertainty lingers. South Korean schools have taken similar precautions — with social distancing and wearing masks. But some schools have had to close after students tested positive.

Meanwhile, select European schools have started phased reopenings. For example, France also had to close some schools again after dozens of new confirmed cases — but the majority of them remained opened. Denmark saw a slight uptick in cases when it reopened in April, but that number is on the decline.

"Inevitably there will be some cases of COVID-19 that will occur, and the ability to figure out who might have been exposed to that case is a protocol development activity schools should do, and do a dry run so they know whether they are equipped or not," said Dr. Nasia Safdar, infectious disease faculty member at the University of Wisconsin.

Here's the common thread: Schools around the world are implementing measures like social distancing or phased reopenings. With planning underway for in-person learning in the U.S., a number of states are making similar considerations.

Dr. Tara Kirk Sell and her colleagues at Johns Hopkins Center for Health Security say we need more research on how the virus impacts children. But she admits, this is a balancing act.

"Where does that risk lie in terms of the epidemiology and also that other side of risk. What is the risk to society of keeping that thing closed?" Dr. Sell asks. "But the thing I want to know more about is if kids can give it to the adults in the schools, especially if they are older adults in the schools, or if they can go home and give it to their parents or family members who may be high risk."

Back in China, Benoit agrees staggered start times will help avoid overcrowding when in-person learning resumes stateside. She says empathy and patience will be key.

"[That means] sort of allowing space for people to feel how they want to feel or need to feel, and while at the same time trying to kind of make sure the school year runs and continues and can finish out on a good note," Benoit said.

Benoit says she's unsure if the U.S. is ready to open schools right now, adding no matter how much you plan, you're still at the mercy of the virus.