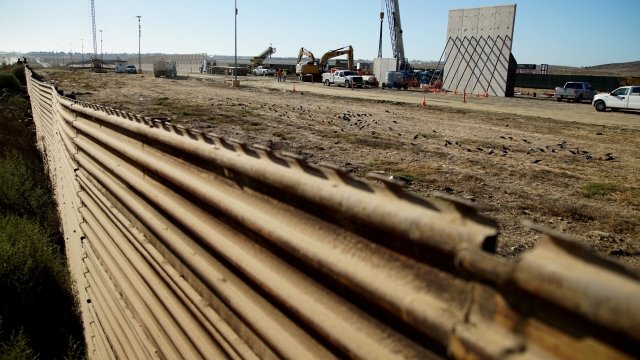 We've been hearing about it for years now. The wall. Big, shiny, beautiful and, until now, mostly theoretical.

President Donald Trump continues to insist on a physical wall separating the U.S. and Mexico, although securing the billions of dollars in necessary funding has been impossible, thus far. But the president does have options now. Eight of them.

Companies have built prototypes, overseen by Customs and Border Protection in San Diego. They're big, no doubt.  But are they viable?

In a May 2017 announcement, the government told contractors that "The wall design shall be physically imposing in height." Thirty feet is preferable. "Designs with heights of less than 18 feet are not acceptable." Underground is also a consideration — tunneling has to be prevented below ground for at least six feet.

A few more items on the wish-list: a see-through element, which Trump came up with himself. The wall should also keep a potential crosser busy at the bottom 12 feet for 30 minutes to four hours using a "sledgehammer, car jack, pick ax, chisel" and other tools.  After an hour of drilling, the hole can’t be larger than a foot, which a human body might fit through. 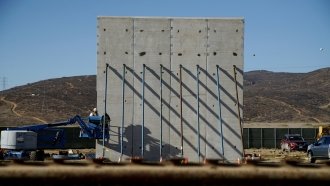 After some work, here’s what they came up with: 10-foot by 10-foot mock-ups. Some are solid, some are see-through thanks to evenly spaced bars, and the materials run the metal and concrete gamut.

The Washington Post details one model: "Texas Sterling Construction built its wall to differ on each side. The U.S. side used a stamped brick pattern, while the Mexican side has metal grating at the top and is covered in spikes." What happens now? "The completed wall sections will need about 30 days for the concrete to cure, followed by 30 to 60 days of testing and evaluation."

Here's what that entails:

— Impedance and denial of traffic

— Is it safe for border patrol agents?

After that, the winning bid, or bids, could land a massive contract and begin construction across the 2,000-mile border. Some parts are easier to build a wall on than others, like the Rio Grande River.

Looking ahead, the miniature walls are there, and the president may love them, but Congress has to hand over the money: billions upon billions for a wall that more than half of Americans don't want to build, much less to pay for.