What To Expect From The Third Season Of 'House Of Cards' 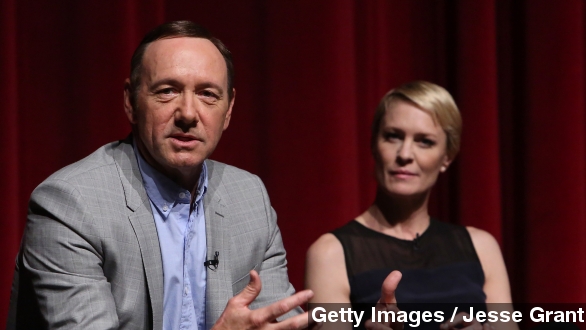 SMS
What To Expect From The Third Season Of 'House Of Cards'
By Ben Lawson
By Ben Lawson
February 26, 2015
The next season of "House of Cards" is almost upon us. Here's what you need to keep in mind from last season, so you can keep up with the Underwoods.
SHOW TRANSCRIPT

It's been a long year since the last season of Netflix's "House of Cards." And if you're gearing up to binge-watch the third season Friday, it might not be a bad idea to brush up on the Underwood's antics from last year. Warning: huge season two spoilers to follow.

"You want to know what takes real courage? Holding it all together when the stakes are this high," says Frank Underwood in "House of Cards."

Season two ended with the Underwoods successfully stealing the presidency, and now it's hard to imagine what's next for Frank and Claire. The show has focused on the power couple's ruthless ambition to make it to the top; so what's left now that Frank is sitting behind the desk in the Oval Office?

Frank, played by Kevin Spacey, has worked his way through the two highest political offices in the country without a single vote cast in his favor, so it's likely he'll battle challengers who see him as vulnerable in a real election.

And a critic for Deadline says a stumbling Frank Underwood is exactly what season three needs:

"Now President Underwood, it's a bit different for him. He is hitting nothing but strikes, and it gives him real bite and bile."

And it also looks like everything the Underwoods have done might be taking a toll on Claire.

"I'm starting to question all of it, Francis. What are we doing this for?" says Claire Underwood in a trailer for "House of Cards."

Series creator Beau Willimon told The Hollywood Reporter he wanted to take the characters into uncharted territory this season: "We're trying to tackle stories and facets of these characters that are unchartered territory. We want to surprise ourselves as much as we want the audience to be surprised."

It would be a surprising but not unreasonable turn for Robin Wright's ice queen character, Claire, to start showing remorse. Frank has killed two people and destroyed Lord only knows how many careers to get to where he is now. (Video via CBS)

And some of their dealings could begin to unravel. Last season ended on a huge cliffhanger with Frank's right-hand man Doug Stamper, played by Michael Kelly, being left for dead by the one person who could link Frank to a murder. (Video via PopSugar)

It also looks like we are going to see the show mirror some real-world politics this season as the fictional Russian president will be making a visit to The White House.

Regardless, expectations are high for this next season of "House of Cards" after the last two snagged multiple Emmy nominations and Golden Globe wins for Spacey and Wright.