What To Expect From NYC's Big Climate Change Week 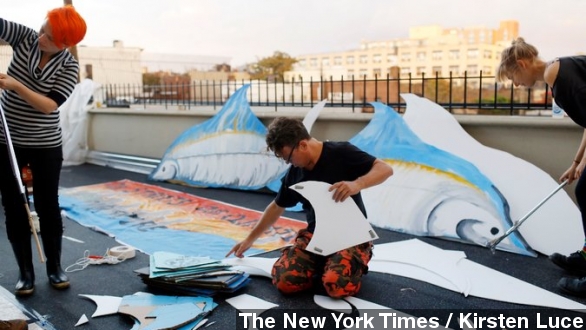 SMS
What To Expect From NYC's Big Climate Change Week
By Matt Picht
By Matt Picht
September 20, 2014
World leaders and activists are gathering in New York City for a massive summit and a protest march, to prompt action on climate change.
SHOW TRANSCRIPT

Climate change activists are taking over New York City next week. The city is hosting several high-profile events in what will be the latest push for global action to combat climate change.

The activities begin Sunday with the People's Climate March, a massive rally of environmental activists and groups marching past Times Square. Organizers expect the turnout to surpass 100,000 people and over 1,500 businesses and organizations are supporting the movement. (Video via Al Jazeera)

If the March meets its turnout goal, it could surpass Copenhagen's massive climate change protest in 2009 as the largest demonstration of its kind in history. (Video via Grist)

After the rally, climate groups are planning a week's worth of public events about climate change, stretching from Sept. 22-28.

It's all part of the run-up to an international climate summit, to be held at the United Nations headquarters in New York on Sept. 23. U.N. Secretary General Ban Ki-Moon will join 125 heads of state, including U.S. President Barack Obama, to discuss climate issues.

These events are billed as some of the most significant protests against climate change in recent years — but how much of the sentiment could translate into action?

For starters, don't expect any significant agreement out of the U.N. summit. This meeting isn't a formal part of the international negotiations about dealing with climate change — the next phase in that process will take place in late 2015 at a meeting in Paris.

Instead, a writer for ThinkProgress expects world leaders to jumpstart initiatives and reaffirm their commitments to fighting climate change at the summit. Effectively, the meeting will give everyone a firm idea of where each nation stands on climate change.

The summit is also expected to re-energize the international climate change debate, which lost a lot of momentum on the world stage after a disappointing 2009 conference in Copenhagen failed to produce much in the way of serious commitments. (Video via Voice of America)

Activists say the protests and events surrounding the summit can help claw back some of that lost momentum.

NY1: "We're trying to put some pressure on the U.N. to make some changes, not now, but right now."

The People's Climate March is being joined by simultaneous events in about 150 countries around the world. It starts at 11:30 a.m. EST.