What This MIT Sensor Could Mean For The Future Of Robotics 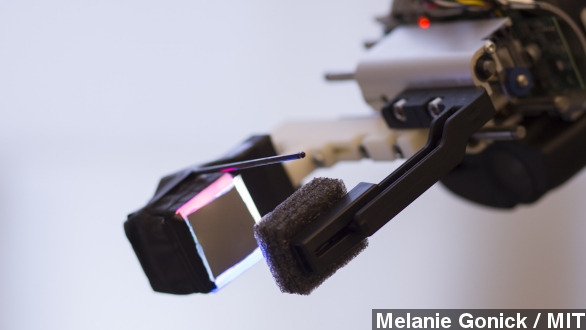 MIT researchers have discovered the answer to our USB woes, and it's all thanks to a visual technology called GelSight.

GelSight is a sensor that combines lights, cameras and a rubberized pad to give robotics "unprecedented dexterity" by enabling them to feel objects with sight.

Yeah, it's a little confusing. Basically the GelSight sees through the use of a rubber pad with metallic paint on its back surface. Light shines in on the paint, and as pressure is applied to the front side of the pad the light bounces off the paint in different ways. The cameras read these changes in light to give the computer a very detailed understanding of the object it's holding.

And here's where that whole saving-us-from-USB-woes comes into play. The sensor can be used in conjunction with a robotic arm to help it more precisely control objects. Watch what happens when the robot doesn't have GelSight ... now that's just disappointing. (Video via Melanie Gonick, MIT News)

MIT says its GelSight is “100 times more sensitive than a human finger.” So to be fair, the technology could be used for a whole lot more than just plugging in USB devices.

A writer for Geek.com reminds us it might seem like a super-simple task — and therefore could seem kind of unimpressive — but grabbing and positioning objects like this is unheard of in robotics. We've made up for this in the past by pre-positioning objects for bots, but now “they’ll no longer be limited to picking and placing objects that have a fixed position.”

And we'd be remiss if we didn't include the robots-will-destroy-man speculation from Gizmodo. “This could allow assembly-line robots far more ability to pluck things from one conveyor belt and plug them into corresponding parts ... Or, y'know, allow them to pick up knives and kill us all with millimetric precision.”

Maybe just keep those kitchen knives in the other room? You know, just to be safe.