What 'The World's Poorest President' Leaves Behind 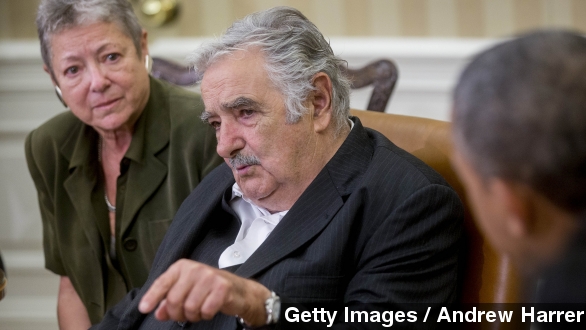 Since taking office in 2010, "the world's poorest president" — a moniker he earned by donating 90 percent of his salary to charity — has been busy. (Video via Government of Venezuela)

He's not only completely legalized marijuana but also set in motion a plan to create the world's first state-run marijuana marketplace, which his successor has said he'll uphold. (Video via Al Jazeera)

Last year, he signed a bill into law legalizing gay marriage in the country, making Uruguay only the second country in Latin America to do so. (Video via CNN)

Through all of this, the country has earned the distinction of being the most democratic country in South America, along with the most peaceful, most prosperous and safe, and with the most press freedom and least corruption.

And yet, the man has drawn countless profiles because he rejects the usual trappings of most presidential offices.

He lives in a simple house on the outskirts of the capital Montevideo, with his wife and dogs, including a three-legged mutt named Manuela. (Video via laSexta)

In lieu of an armored limo, the president gets around in a 1987 sky blue Volkswagen Beetle, which he says an Arab sheikh offered to buy off him for a million dollars. (Video via BBC)

His approval rating is reportedly running around 65 percent, and his successor, Tabare Vazquez, is a fellow Broad Front party member and progressive. (Video via Univision)

This video includes an image from Pumbaa80 / Public Domain.