What The Latest DACA Ruling Means For New 'Dreamers' 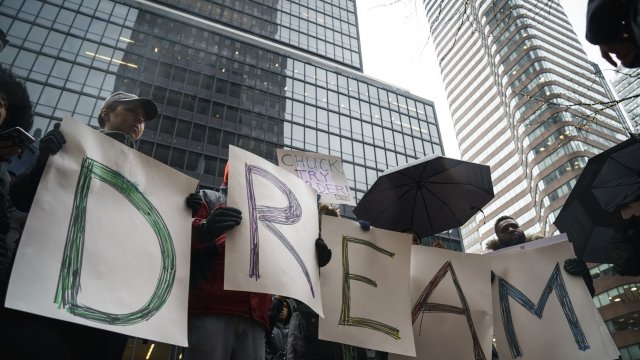 SMS
What The Latest DACA Ruling Means For New 'Dreamers'
By Ben Schamisso
By Ben Schamisso
April 25, 2018
Who are the potential first-time DACA applicants who could benefit from the latest ruling by a federal judge in favor of the program?
SHOW TRANSCRIPT

Tuesday evening, a federal judge issued yet another blow to President Donald Trump's efforts to rescind the Deferred Action for Childhood Arrivals program. To shed light on what this latest ruling means for current DACA recipients as well as potential first-time applicants, we sat down with immigration attorney Mony Ruiz-Velasco.

DACA protections might be available to thousands of eligible first-time applicants by the end of July if the administration cannot come up with a reason good enough for the courts as to why the program should be rescinded. If that occurs, the Supreme Court will then likely review the case. 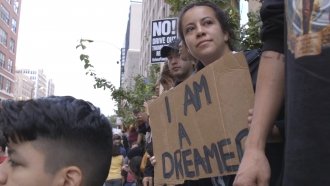 NEWSY'S BEN SCHAMISSO: Who are those first-time applicants who could — if the ruling stays — soon apply for DACA?

RUIZ-VELASCO: Well, there's a couple of different categories. One is people who, for one reason or another, never applied before so maybe they didn't have the money or maybe they weren't sure, maybe they were scared. There's a lot of reasons why people didn't initially apply. The other important group — and I think is the group that a lot of us are going to focus on — are people who aged into DACA. So people who have been here since 2007, but who turned 15 years old in the last while. So you have to be at least 15 to apply for DACA. And if you turned 15 after September when the president ended the program, you weren't able to apply anymore.

SCHAMISSO: What have you heard from DACA recipients and potential first-time applicants. What is their reaction to the latest news?

RUIZ-VELASCO: There's just been so much confusion. So, you know, the main thing I think right now is getting the message out. But I think people are feeling like, 'Wait, can I apply? Can I not apply?' I think it's going to be important for people to make sure they don't fall prey to becoming victims of fraud. They should know that right now, they cannot apply if they're new applicants — only renewals. And we have to wait the 90 days. So, people can start preparing, people can understand what the requirements are and what they need to gather, but there's nothing to apply for.

I think the difference right now, though, is that — people were scared before — but I think people will be more scared today of, especially if they've never been in the government system in any other way, of saying under the current terms of this administration, 'Am I willing to give up all my information?'

SCHAMISSO: Because the ones who renew, they know that the information on them is already available to the government.

SCHAMISSO: But being a first-time applicant — if the option to apply for DACA becomes a thing for them — then the next question is, 'Do we trust the government enough to do it?'

RUIZ-VELASCO: Exactly. Yeah. And given the record that this administration has shown. I think people will be and they should be, you know, they are. It's a legitimate fear, right? People are going to be scared. I think people are gonna have to balance out the benefit with the fear.