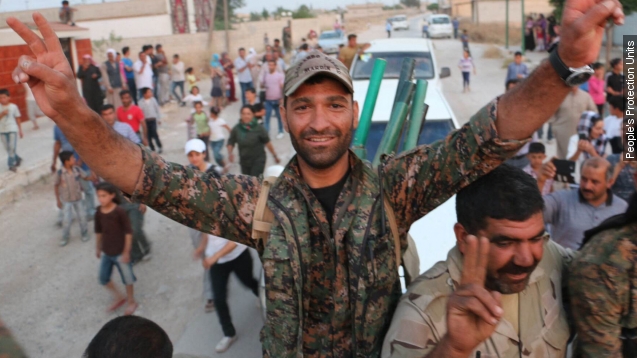 SMS
What The Fall Of Tal Abyad Means For ISIS And The Kurds
By Jake Godin
By Jake Godin
June 16, 2015
Tal Abyad has been captured by a Kurdish-FSA coalition, and ISIS has been driven out. So what does it mean for the players involved?
SHOW TRANSCRIPT

YPG's media account declared the Tal Abyad liberated within 24 hours after the siege began. Footage of FSA and Kurdish battalions celebrating at Turkey's border and erecting the FSA flag was posted online not long after.

The Syrian Observatory for Human Rights reported the deaths of 40 ISIS militants and said the rest fled into southern and western villages. The YPG is now attempting to clear the area of landmines.

The city's fall concluded weeks of gradual progress by Kurds and FSA forces from two regions, or cantons, in northern Syria — Kobane to the west and Jazira to east.

Up until now, the two regions were isolated from one another. Taking Tal Abyad means Kurds have now created what is essentially a bridge between the two cantons. This brings two advantages for the Kurds: Fighters can now travel freely between both cantons without having to go into Turkey, and second, Kurdish Peshmerga forces from Iraq can now theoretically reach farther into Syria if the need ever arises.

The YPG-FSA forces owed their advancement in part to U.S.-led coalition airstrikes, which helped pave the way for fighters to push ISIS out of one village after another. (Video via Euphrates Volcano)

The city's capture marks ISIS' most significant defeat since it lost the Iraqi city of Tikrit in April. But this loss may be a much bigger strategic blow to the self-declared caliphate.

That's because Tal Abyad served as one of ISIS' vital links to the outside world. Being less than 60 miles from the de-facto ISIS capital of Raqqa, Syria, it was the most direct route for both foreign fighters and supplies to reach the organization.

The group still has another border crossing to the west, but only a river separates the city from the Kurdish-dominated Kobane canton, and the crossing is much farther away from Raqqa than the prior crossing near Tal Abyad.

But while the liberation of ISIS-held territory up until now has included a mix of Arab and Kurdish populations, villages south toward Raqqa are primarily Arab. That may pose a problem. (Video via Euphrates Volcano)

Although the two share a common enemy, Kurdish progression into Arab land has the potential to cause friction between the groups if Arabs perceive Kurds are pushing them out of their homeland. (video via Euphrates Volcano)