What The Fact: We Answer Your Questions About The Impeachment Inquiry 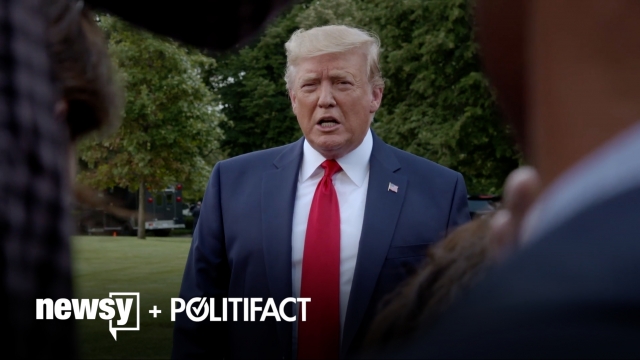 SMS
What The Fact: We Answer Your Questions About The Impeachment Inquiry
By Newsy Staff
By Newsy Staff
November 15, 2019
The impeachment inquiry is confusing. PolitiFact helps us explain the process and answers some of your questions.
SHOW TRANSCRIPT

Hey everybody and welcome to "What The Fact," your weekly look at what's right and wrong in U.S. politics. I'm Aaron Sharockman.

And I'm Katie Sanders. Aaron and I are editors with PolitiFact, a nonpartisan website that brings you the truth in politics. Lately, Aaron, we've been pretty consumed by impeachment.

Lots of conversations about what's going on and kind of who's winning, who's losing. We're not going to get into that, but there are some important questions about the facts of the process and what's happening in this case investigating President Donald Trump and his call and his alleged quid pro quo with Ukraine. We're going to get to the bottom of some of that.

But first, Newsy's going to walk us through a little bit more about the impeachment process and how it works.

The public impeachment investigation into President Donald Trump is underway. Here's how that will play out in the coming months.

First, it's important to note impeachment is the process, not the outcome. Presidents Andrew Johnson and Bill Clinton were both impeached, but neither one was removed from office.

The president, vice president and all civil officers can be impeached for "treason, bribery or other high crimes and misdemeanors.

The process started in the House of Representatives. On Oct. 31, lawmakers approved a resolution laying out the rules for the investigation, which is being spearheaded by the House Intelligence Committee. The results of that probe will be presented to the House Judiciary Committee.

That committee can continue to hold hearings before deciding whether to draft articles of impeachment or any other type of resolution. The committee will vote on whether to send the charges to the full House.

If the full House votes and approves articles of impeachment by a simple majority, President Trump will officially be impeached. After that, the process moves on to the Senate.

A committee of representatives from the House would act as the prosecutors in the Senate trial. The Senate plays the role of the jury. And since we're talking about a presidential impeachment, Supreme Court Chief Justice John Roberts would preside over the trial. A two-thirds vote in the Senate is required for a conviction.

In the history of the U.S., the House has initiated more than 60 impeachment investigations, but only 19 cases have moved on to the Senate.

Thanks, Newsy, for that. Katie, we asked readers for questions at PolitiFact.com. We were kind of wondering what they were thinking about when it came to the impeachment process, and actually, we got a lot of feedback from a lot of people who wanted to know a lot more about what's going on these days on Capitol Hill. So it was not only good for us to answer their questions, it also turned out to be a really good story. You can read it on PolitiFact.com, and we're going to highlight a couple of those questions right now.

All right, so we have three. The first question that we got was: How are the president's powers limited while under an impeachment inquiry?

Now I did do some research about this one, our team did, and we found that there's really no reason for his powers to be limited, practically speaking. It's going to be difficult to interact with Congress and get anything on anybody's agenda moving forward.

Yeah, experts we talked to were saying there is some debate whether the president can defy congressional orders as much as he would normally do under an impeachment inquiry; however, clearly Trump is not taking that too much to heart.

He has refused to let many White House officials testify before the House Intelligence Committee, most notably probably, Mick Mulvaney, but also others.

So, even if that's a possibility, he doesn't as so much care. I guess we'll see if anyone challenges him on it.

One of the other big questions, Katie, that I think a lot of people ask is: How long is this thing going to take? And is it something that can actually outlast when people are going to start voting in 2020?

OK, well I think it's really important for people to know that the rules for impeachment are very limited. The Constitution does not go into great detail about how long it has to take, certain deadlines. The granular detail of the process is really decided by the House. That starts the impeachment proceedings.

Now we did talk to a lot of experts who were familiar with the previous impeachment processes. And basically they told us to expect this to be wrapped up way before Election Day. So while it may drag on possibly until spring, if the House elects to move forward with impeachment and kicks it over to the Senate for a trial, it won't take all that long to figure out.

All right, one more question. Is there any actual recording of the call?

We really wish there was. Now, the first thing that's really important to note is that the president has said a million times to read the transcript of the call.

Well it's really important to note, it's not actually a transcript. At the top of the document, it says, "This is not a verbatim transcript." Yet the White House and others keep making that error. Now is there a recording of the call?

We've asked the White House and they haven't said anything, to say there is or there isn't. We do know that the limited transcript, the electronic version, was loaded up into an area designated for calls that are normally discussing explicitly national security related issues.

The whistleblower said there was nothing in that call that he or she was aware of that was that important or that substantive on the front of national security — that it would require being in the lockbox, if you will.

But I think you have to file this under: We'll wait and see.

All right, well you won't have to wait and see our fact-checks about the impeachment inquiry ever or always. At PolitiFact.com, we have a running list of all we're doing including fact- checking statements made by both Devin Nunes and Adam Schiff.

They're the two guys running the House Intelligence Committee on either side of the aisle. You can see all those fact-checks on PolitiFact.com.