What The Fact: Illegal Immigration Rates 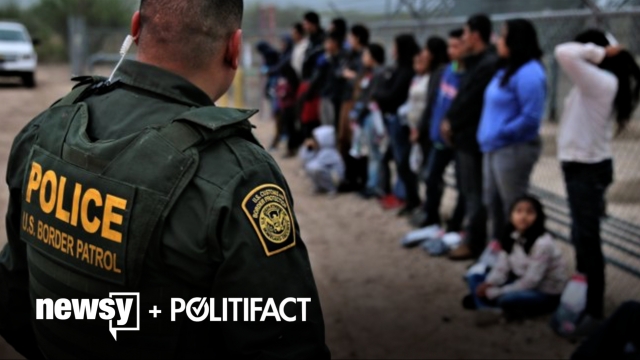 SMS
What The Fact: Illegal Immigration Rates
By Newsy Staff
By Newsy Staff
November 8, 2019
A new campaign ad says President Trump cut illegal immigration in half. But that may not be a fair representation of the bigger picture.
SHOW TRANSCRIPT

Hello and welcome to "What The Fact." I'm Katie and this is Aaron and we are editors with PolitiFact.

Every week we sort out fact from fiction on the campaign trail and in the White House, and now we have this impeachment inquiry we're sort of keeping our heads around.

This week we're going to take a look at a campaign ad. It's a big one, it's really the first election ad from Donald Trump, and you might've seen it during the World Series if you were watching the Nationals beat those Astros. In the claim and in the ad, Donald Trump makes a number of specific types of statements. One that really caught our attention, a big one, was about illegal immigration. Here's what it had to say:

"President Trump is changing Washington, cutting illegal immigration in half."

All right, Katie, let's just get into this. So Donald Trump, in this ad, claims that he cut illegal immigration in half. The ad cites something from Fox News from September of 2019 if you read that very small type. We're not going to take their word for it, the ad maker or necessarily Fox News, so we wanted to put this on the Truth-O-Meter. Katie, what did we find?

OK, so Trump isn't talking about apprehensions before and after he came into office, which I think a lot of people would assume.

No, he's referring to a three-month period over the summer actually where apprehensions, which is a common way to measure illegal immigration, dropped by about 60%.

So basically what happens is the government is counting people who are trying to cross the border illegally that they apprehend and either send back or potentially arrest. And in that one three-month window they saw a 62% decrease, but when you talk to experts, they kind of en masse say, "Well that's not the way to do it. The best way is to either compare it year over year or even going better, looking at from when Donald Trump took office to now."

And I think so far, President Trump's annual average is actually higher for apprehensions than in the Obama years. You would not get any of this from watching the ad, which is why it left a lot of journalists and citizens puzzled about what he was talking about.

Well, as fact-checkers, we're not going to be puzzled by that, are we, Katie? So how do we rate this claim on our Truth-O-Meter?

It's pretty clear this is a false claim. So it gets our False rating. Experts say it was a silly comparison to compare Trump to Trump, especially for such a short period of time. You can't get a trend out of that amount of data.

Yeah so that's one claim in a long series of ads that we're going to see between now and next November. Immigration is going to clearly be a focus of this race for the next year.

And one of the things that we're going to be wondering about is just what is the situation on the border. Where are illegal border crossings taking place? What is the government trying to do to stop them? And what do the numbers look like?

Newsy's going to walk us through that.

The number of people apprehended along the U.S.-Mexico border in the 2019 fiscal year more than doubled from the previous year. We wanted to know where the highest number of illegal crossings happened.

Illegal immigration is often tracked by the number of people apprehended between ports of entry. For the 2019 fiscal year, that number is over 851,000. A majority of those encounters — 61% — happened in the El Paso and Rio Grande Valley border sectors.

The El Paso Sector runs all along the southern edge of New Mexico and about 90 miles into the western corner of Texas. About 166 miles in this region have some kind of fencing — that includes the low vehicle barriers and the taller pedestrian wall.

Illegal crossings in the El Paso Sector spiked in the past year. It's unclear what caused the sudden increase, but geography may be part of the reason. The river near El Paso, Texas, is shallow, making it easier to wade across. And Juarez, one of the biggest cities in Mexico, sits just on the other side of the international border.

The Rio Grande Valley Sector in southern Texas runs along the river, stretching 273 miles inland from the Gulf of Mexico. Fifty-five miles of primary fencing already exists there, and this region has been a key focus for the Trump administration's border building efforts. Customs and Border Protection recently awarded contracts to build 65 miles of new "border wall system" in south Texas. That system includes new lighting and security cameras, so the projects won't necessarily add 65 miles of new border wall.

For years, the Rio Grande Valley has consistently accounted for a high percentage of illegal crossings. The southern tip of Texas is about 1,100 miles from the Mexico-Guatemala border, making it one of the shortest trips for Central American migrants hoping to reach the U.S.

All right, thank you, Newsy. Now, Aaron, I think some people might not know that at PolitiFact we have a reporter dedicated to covering immigration. That's her job. So if you hear a claim about immigration and you don't know if it's true, email immigration@politifact.com.

Of course we're going to have our hands really full with a lot of other claims from the debates, from President Donald Trump, from the impeachment inquiry, so if you want to read more of our work, go to politifact.com.