What The Fact: Examining Teacher Pay 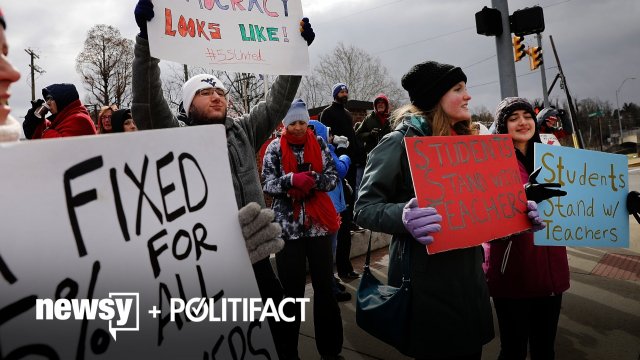 SMS
What The Fact: Examining Teacher Pay
By Newsy Staff
By Newsy Staff
October 18, 2019
A number of teacher strikes across the country made us wonder what's true and what's not when it comes to teacher salaries.
SHOW TRANSCRIPT

Hello and welcome to "What The Fact." I'm Katie and this is Aaron. We're editors at PolitiFact.

We're sorting out today a fact about teacher pay. You know it's something that comes up every election year. We hear it all across the country. In Florida, for instance, Gov. Ron DeSantis is proposing a $47,000 minimum teacher salary. In Mississippi, the Republican running for governor there is running on a platform giving teachers a $4,700 a year raise. Yet when it actually comes to teacher pay, kind of what people want and what actually happens often doesn't line up.

Yeah and in Chicago there's a huge debate going on between the teachers union and the Chicago mayor who is new, Mayor Lori Lightfoot. Lightfoot was at a town hall recently where somebody asked her about teacher pay and whether the city's offer to teachers was a fair deal. She said she agreed that teacher pay was important, but then she made this claim:

"Teachers do need to be paid well and in Chicago, they are. Teachers in Chicago public schools are paid some of the highest compensation of any school system in the country."

Our partners at PolitiFact Illinois, which is powered by the Better Government Association, heard that claim and wondered if it was really true. So, time for a fact check.

Yeah, and unfortunately for the Chicago Public School teachers, it's not so true. We rated this claim Mostly False, which means there's a sliver of accuracy but really it leaves a lot of things out.

The mayor's office pointed to data from the 100 largest cities in the United States and found, even in that case, that they're not really one of the highest. They were something like 22nd.

Right, so we continued to look for more data that was maybe more comprehensive comparing districts of all shapes and sizes. We found that the picture does not turn out to be much better for Chicago, not even in the state of Illinois. It was well outside of the top 20 when you looked at that data. Now there is no perfect data, right? So we went with the best information we could find. But what we found does not support her point.

Yeah, I think one of the things that's important to note, obviously, is Lightfoot's office was looking at kind of what they're paid, which is reasonably high, but what it's not taking into account is how much it costs to live in Chicago. So obviously a dollar will go less far in Chicago than it does somewhere down state in Illinois or more rural places around the country.

Even so, teaching jobs in America are just not known for paying well, and there's a reason for that. For more context, our partners at Newsy are here to explain.

The 2018 teacher strike in West Virginia lit a fire under educators across the country. A growing number of teachers and school districts have gone on strike to demand better wages. So we wanted to know: How has teacher pay changed over time?

The most recent government data puts the average annual salary for public grade school teachers at $60,483. If you look at the raw numbers, it shows the median wage has gone up consistently for decades. But when you consider inflation, the numbers tell a different story. After making that adjustment, the average median teacher salary has been pretty stagnant since 1987.

So why has teacher pay been historically low? Experts say that largely comes down to sexism. Since the beginning of public education, a majority of teachers have been women, in large part because for decades it was one of the few jobs women could hold. Susan Moore Johnson, a Harvard professor and education policy expert, told Newsy teacher pay started to improve in the 1960s and 1970s. Johnson said: "For the first time, schools had to compete for talent, though that realization came slowly. ... Generally, public education has not kept pace with the salaries that teachers deserve."

Most people know that teaching isn't a high-paying profession. An annual education poll found 71% of adults would support teachers in their community going on strike for higher pay. And a 2019 poll by Education Next found a majority of people believe teachers should be paid more. However, respondents were less likely to support a pay raise when they were told how much teachers in their area make.

Politicians running in 2020, Katie, are going to look at polls like that and use them to make decisions about how far and how fast they want to go when it comes to raising teacher pay.

And if you want to read more fact checks about teacher pay or a swath of other issues that are coming up in 2020, head to our website at Politifact.com.