What The Fact: Checking U.S. Deployments In The Middle East 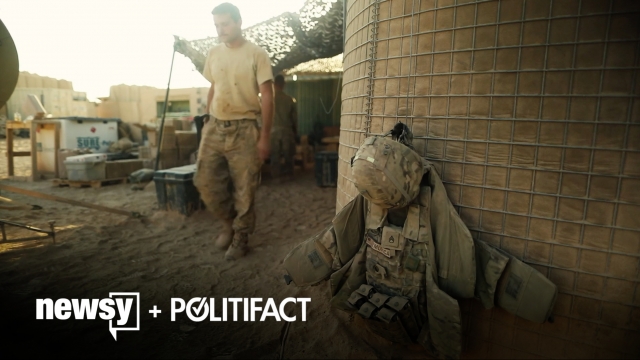 SMS
What The Fact: Checking U.S. Deployments In The Middle East
By Newsy Staff
By Newsy Staff
October 31, 2019
There's no way around it: America's military involvement in the Middle East is complicated. So where do troop levels stand today?
SHOW TRANSCRIPT

Hello and welcome to "What The Fact." I'm Katie and this is Aaron, and we're editors at PolitiFact.

Every week we sort out fact from fiction, from the campaign trail to the White House and everywhere in between. This week it's kind of a mix.

Donald Trump often talks about sending the troops home. Here he is:

"We're bringing our soldiers back home from the endless wars."

"The plan is to get out of endless wars, to bring our soldiers back home."

"American combat troops should not be at the center of ancient, sectarian conflicts all over the world. Bring our soldiers back home."

So if you listen to Trump, Katie, the troops are coming home. But actually, one of his former advisers paints a pretty different picture. Here's Brett McGurk:

"One final point. Leaving Syria cedes so much influence to our adversaries. It has ceded initiative to Iran — that is one reason we're seeing so much increased tension in the region. And President Trump has sent 14,000 troops to the region since May. So he can't tell his political rallies that he's getting troops out of endless wars when he's sending 14 times the amount back into the region."

When we heard what McGurk said on "Meet the Press," we wanted to do a fact-check because we really didn't know if that was really true.

We're going to get to that in a little bit, but first we're going to bring you some context in our partnership with Newsy to lay out what the current U.S. military obligation actually looks like around the world.

The U.S. military regularly deploys troops around the world. Thousands of people are stationed in allied countries like Germany, Italy, Japan and South Korea every year.

But after 9/11, the U.S. started sending thousands of troops to the Middle East, starting with Operation Enduring Freedom.

For the first year of that offensive, a congressional report estimates that, on average, between 5,000 and 9,000 individuals were deployed on the ground in any given month.

But thousands more participated from elsewhere, like from Navy ships positioned nearby. The number of troops on the ground in Afghanistan peaked in 2010 and 2011 at around 100,000.

Since then, the count there has gradually dropped. Current U.S. troop levels in Afghanistan are estimated at about 12,000 or 13,000.  The U.S. has also had troops on the ground in Iraq for the last 16 years.

That effort started in earnest in 2003 with the launch of Operation Iraqi Freedom. Six months after that invasion began, the U.S. had about 183,000 active duty military personnel stationed in and around Iraq.

That operation officially came to an end in December 2011. By September the next year, there were less than 200 active duty military troops in Iraq.

But levels started going up again in 2014 with the beginning of Operation Inherent Resolve, the international task force focused on battling ISIS in Iraq and Syria. September 2017 was the last time the Department of Defense released specific personnel numbers for Iraq, Afghanistan and Syria.

That quarterly report said about 27,300 active duty, reserve and civilian personnel were deployed in those three countries.  For years, politicians on both sides of the aisle have called for bringing troops home from the Middle East.

Presumably, they're focused on bringing combat troops home, but achieving that is complicated. History shows a sudden drawback of U.S. troops can increase instability.

President Barack Obama's 2011 withdrawal of troops from Iraq played a big role in the rise of ISIS, and ultimately thousands of U.S. troops were sent back to the region.

Despite controversy over keeping troops in the Middle East, America has a vested interest in the region. The U.S. has been there to promote peace and human rights, to protect oil reserves and the global market from instability, and to defeat terrorist groups who can thrive there.

Politicians often talk, Katie, about pulling troops out of war zones and places overseas, but it's actually a lot harder to do than it is to talk about.

And so here we have Brett McGurk saying in Trump's place he's kind of celebrating that we pulled out 1,000 troops from Syria.

He's actually saying well Trump has inserted 14 times more troops, 14,000, into the same region. And in a very short amount of time.

So when we followed up with McGurk about where he was getting this information, he referenced a Department of Defense press release from Oct. 11.

And in that press release, the U.S. announced a commitment of about 3,000 troops to Saudi Arabia. The press release went on to say and to talk about the U.S. military involvement across the Middle East and across other parts like Afghanistan and Central Asia.

And that brought the number of troops to about 14,000 committed just since May. So McGurk's statement really did check out. And it rates?

All right, true. You don't see that too often. In this case, Katie, we don't necessarily know where all of these troops are, is that correct?

Well, we don't have a really recent picture for the amount of troops that are in areas of conflict. So Afghanistan, Iraq, those numbers aren't actually factored into that 14,000 total.

So it could be even more than that. That's interesting.

So again, it kind of goes against what Donald Trump is saying in saying "I'm bringing the troops home" and trying to fulfill that campaign promise he made back in 2015 and 2016.

OK, that's going to do it for this week's episode of "What The Fact." If you want to stay in the know about what's going on in the election, Syria, impeachment inquiry, all of the above, go to our website www.politifact.com for even more fact-checks.