Here's What The Democratic Frontrunners Are Saying About Gun Safety 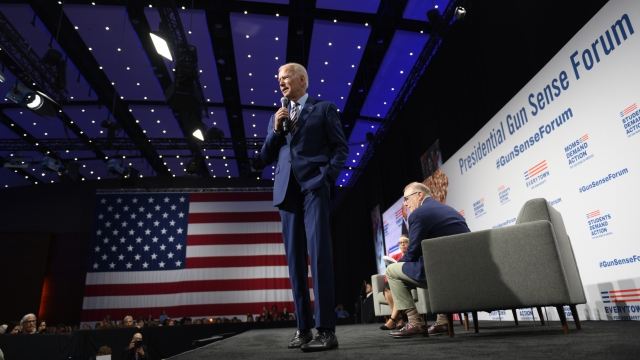 At a town hall in Iowa on Saturday, Democratic presidential candidates pushed lawmakers to impose tougher gun safety laws. Here's what some of the top contenders said:

"What I'm going to do as, if you choose me to be your president, is take what you have turned from a cause into a movement. Things have changed. They've changed fundamentally. Because we're not only any longer just talking about the major things that have to be done dealing with gun violence in America. We have to start to help educate the American public," Biden said.

Sen. Bernie Sanders pointed to an example of what's worked in the past.

"Prior to 1986, it was legal to own a machine gun in this country. Machine guns, the quickest way to kill people with a gun. But 1986, under Ronald Reagan, machine guns were licensed. And the sale of new machine guns was virtually prohibited unless for very specialized entities. And I think we're going to have to take a good thought and think about the need to license the sale, distribution or transfer or all assault weapons in this country, including those that are owned right now," Sanders said.

And Sen. Kamala Harris proposed a series of executive actions she'd take if elected as president.

"I am prepared, when I'm elected, to give the United States Congress 100 days to pull their act together on this and put a bill on my desk for signature. And if they do not, I will take executive action; I will put in place a comprehensive background check requirement; I will require the ATF to take the licenses of dealers who violate the law; and I will put in place by executive action a ban on the importation of assault weapons into our countries," Harris said.

The town hall comes about a week after a total of 31 people were killed in shootings in El Paso, Texas, and Dayton, Ohio, which marked 251 mass shootings in America this year.