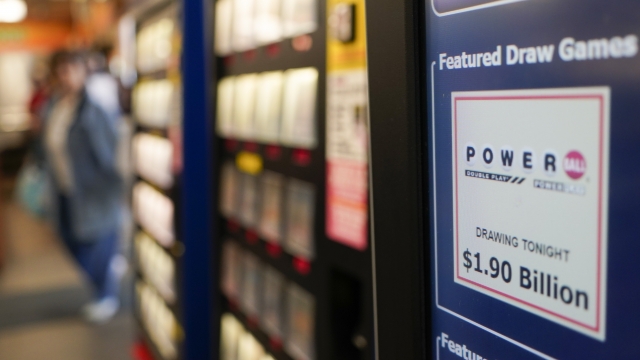 As the Powerball lottery climbs to $1.9 billion Monday night, millions of people are lining up for a shot at buying the ticket of a lifetime.

"If I win, I'll probably take a vacation, help my kids out, and enjoy the rest of my life," said Charles Williams, a Powerball ticket buyer.

This Powerball is the result of 40 straight drawings without a winner, tying a record number of drawings set last year. It's a wait that has many dreaming about how they'd spend the money if they win.

"I would definitely retire, finish my house, probably buy another house, maybe buy a couple of nice cars, take a nice vacation, and then probably set all my friends and family up for the rest of their lives," said Scott Henyan, a Powerball ticket buyer.

"First thing I would buy? I would buy a house, and I would say somewhere in the Midwest - Nebraska, Montana — somewhere away from the city," said John Soohoo, another Powerball ticket buyer.

But lottery lawyers are warning ticket purchasers to be careful, should they somehow beat the one-in-292 million odds and find themselves with the winning numbers.

"You want to put a team together, but you also want the team to be as small as possible, as far as the circle initially, to get the process going," said lottery lawyer Kurt Panouses. "It's also very important to get a financial partner involved."

A 70-year-old Delaware woman said she used some of the winnings from one lottery ticket to buy another for an even bigger win.

Instead of signing your name on your winning ticket, experts advise creating a trust or LLC and signing with that name instead so your identity as the winner stays private.

"That way, we put a whole bunch of hurdles in place to really make it very difficult for anyone to find out who the real owner is," Panouses said.

As for deciding whether to take the lump sum of the lottery winnings or broken-down annual payments, it depends. Some experts say spreading the prize out over 29 years results in about a 4.3% investment gain, but others say winners are better off taking the lump sum.

"I want all the money," Williams said. "I want the cash out, and then I'm going to spend it how I want it because ain't nothing guaranteed in life. So I'll take it all at one time. I'll disburse it the best way I can."

Whether taking the money up front or over time, the California lottery winner's handbook offers this caution: "Spending fast and furious will only fast and furiously separate you from your winnings."