What's To Blame For Worst Ebola Outbreak In History? 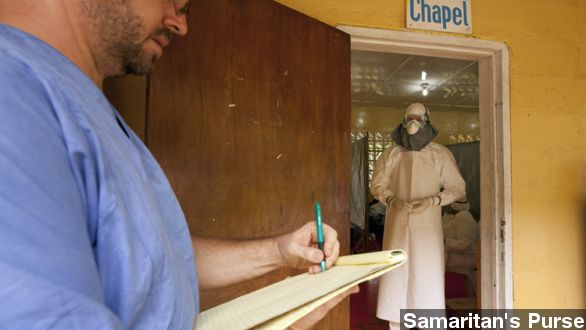 SMS
What's To Blame For Worst Ebola Outbreak In History?

By Jake Godin
July 27, 2014
A U.S. doctor has tested positive for the deadly Ebola virus, as the worst-ever outbreak continues to grow.
SHOW TRANSCRIPT

In another blow to what has become the worst Ebola outbreak in human history, a U.S. doctor working with patients in Liberia has contracted the deadly virus.

Samaritan's Purse announced that Dr. Kent Brantly, a Fort Worth doctor working at the charity's Ebola center in Liberia's capital, tested positive for the virus and is undergoing treatment.

This, just days after it was reported the doctor leading the fight against the disease in Sierra Leone contracted the virus as well. (Via BBC)

And these two aren't the only ones. The diagnosis of multiple doctors underscores how problematic the outbreak has become in Guinea, Sierra Leone, Liberia and most recently in Nigeria where the first death was reported Friday.

The highly infectious virus is thought to be contracted through monkey meat and spreads through contact with bodily fluids, requiring doctors to wear full protective gear when working with patients. (Via Samaritan's Purse)

But West Africa's health infrastructure is barely equipped to handle a cross country outbreak of this scale. A writer at The Washington Post cites the scarcity of doctors in Liberia or Guinea's overburdened health care system as parts of the reason for the epidemic.

Poor health infrastructure aside — misinformation, regional distrust of clinics, and common cultural practices are all also contributing factors to the severity this outbreak.

According to the World Health Organization, there are rumors of cures such as eating raw onions or drinking condensed milk once a day, neither which are effective treatments.

And possibly even more harmful than rumored remedies is that some people in West Africa simply don't believe Ebola is real.

CNN: "Do you believe that Ebola exists?

COYAH GUINEA MAN: "No no no, people, they are only lying."

VICE: "Don't you guys ever worry about Ebola, do you think that it's real?"

LOFA LIBERIA MAN: "No, I don't believe that Ebola is real."

There's also the notion that medical workers are bringing the virus into villages on purpose, as The Independent reported earlier this year when a mob attacked a treatment center in Guinea.

Al Jazeera reports that a similar distrust of health workers led to a patient being kidnapped by worried family members on Friday. Since the patient tested positive for Ebola, she posed a risk to anyone she came in contact with.

A World Health Organization spokesman explained to Voice of America the importance of educating people, saying: "It is really kind of a matter of rumor control.  It is myths and facts.  So we have to dispel these myths about Ebola that are prevalent and that are circulating as rumors that are very damaging."

And a writer for Motherboard explained that cultural funeral rites pose a large challenge as well. The common practice of touching and washing a deceased family member's body spreads the virus through the sweat.

To date, there have been more than 1,000 cases of Ebola in West Africa and more than 600 deaths in this year's outbreak.