What's The Role Of The Chief Justice? 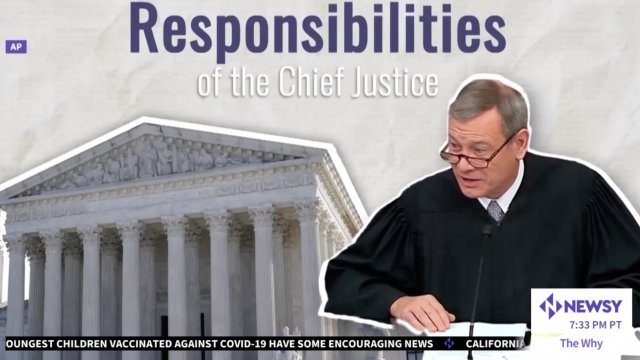 Being Chief Justice of the United States comes with a lot of responsibility, and those duties extend well beyond the Supreme Court’s chamber.

Within the Court’s building, the chief justice is considered the “first among equals,” - meaning he has more responsibility, but his vote doesn’t hold any more weight.

"When you become the Chief Justice, you automatically become the most senior justice on the court from the second you walk in the door, even if there are justices who have been there for decades,” said Amy Howe, the co-founder of SCOTUSblog.

The Chief Justice steers oral arguments in the chamber, and he also leads the justices’ private conferences where they discuss which cases to take and how they’re going to rule.

Chief Justice Roberts is the 17th man to hold that title. His leadership impacts not only how the court operates, but also how the Supreme Court is viewed in the court of public opinion.

“He is a conservative, but he's also very concerned about the courts institutional legitimacy,” said Howe.

Many of the Chief Justice’s responsibilities come from laws passed over the years and court traditions. There’s only one mention of the role in the Constitution, and it says the Chief Justice presides over presidential impeachment trials in the Senate.

Ceremonial duties including the swearing in of new justices and the President of the United States.

He also serves as head of entire federal judicial branch, which comes with a long list of duties. That includes:

-chairing the research arm of the judicial branch

-choosing the 11 judges who sit on the Foreign Intel Surveillance Court, known as FISA Court

Chief Justice Roberts has been leading both the court and the judiciary since 2005, and at 67 years old, court watchers expect him to continue in that role for years to come.