What's The NFL's Franchise Tag, And Why Do Players Hate It? 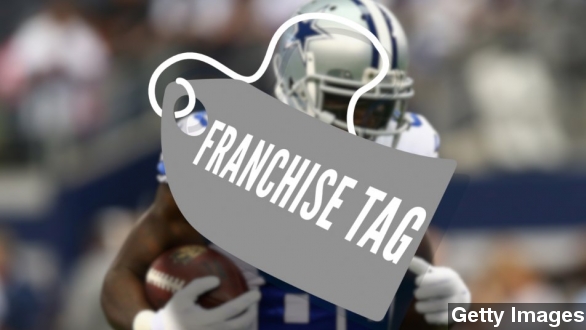 SMS
What's The NFL's Franchise Tag, And Why Do Players Hate It?
By Matt Moreno
By Matt Moreno
February 19, 2015
NFL teams have until March 2 to use a franchise tag to prevent star players from leaving. However, players aren't too excited about the whole thing.
SHOW TRANSCRIPT

The franchise tag has been at the center of a lot of free-agent frustration since its implementation in 1993.

For exclusive and nonexclusive tags, a player is offered a one-year contract worth either the average of the league's top five salaries at his position or 120 percent of his salary — whichever is higher. For a transition tag, the idea is mostly the same except it factors in the top 10 player contracts at that position.

There are a few other differences, too.

Exclusive means the player can only negotiate with his current team.

Non-exclusive means players can still talk with other teams and the current team can match any offer. If the player signs elsewhere, his new team must fork over two first-round picks.

The transition tag is similar, but no draft picks change hands.

It's a rather maddening world for free agents looking for long-term, big-money deals.

Here are just a few of the headlines from offseasons when the franchise tag was used on a high-profile player or, in Cowboys wide receiver Dez Bryant's case, mentioned as a possibility.

For NFL players, it all comes down to job security. ESPN writes: "Players don't like to get tagged. They often see it as an insult, not a compliment. ... There is no up-front bonus or security past the season."

The idea, from the team's perspective, is applying a franchise tag to a player will buy time to hammer out a longer-term deal and possibly sign the player to the franchise for life.

During last offseason's franchise tag grievance by Saints tight end Jimmy Graham, a Bloomberg writer argued the tag is unfair to players, calling it "a get-out-of-jail-free card for owners."

Outside of teams' front offices, the sentiment is that there are more people against the franchise tag than for it.

Teams have until March 2 to franchise-tag a player.