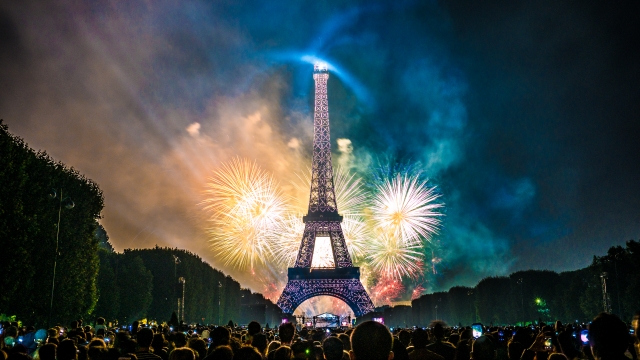 Bastille Day is July 14. It’s a national holiday in France, recognizing the anniversary of the storming of the Bastille in 1789, which is largely seen as a day that helped start the French Revolution. It's celebrated now in France with a massive military parade, parties and fireworks. Quite a few U.S. cities also celebrate the holiday.

In fact, when President Donald Trump saw France's military parade celebration in 2017, he wanted an even better one for the U.S. At least part of that dream came true during Washington's Fourth of July celebration in 2019. There were tanks on display, military planes flying over the National Mall and fireworks.

There's some complicated history behind the storming of the Bastille, so let's just dig right on in. First, the Bastille. It was a military fortress and prison built in the 1300s. It held political prisoners without trial by order of the king. In 1789, the Bastille was set to be demolished in favor of a public square. That didn't exactly go as planned.

At the time, France was facing economic collapse. King Louis XVI and his queen Marie Antoinette had inherited their predecessors' enormous debts, but were still spending a lot of money, which included helping the American colonies during the American Revolution. To combat the spending, they raised taxes. There was also an unemployment problem, and crop failures in 1788 led to a nationwide famine.

So, needless to say, tensions in France were pretty high.

In an attempt to placate the public, Louis XVI brought back the Estates-General, which was a national assembly separated by class — clergy, nobles and commoners. The commoners estate was frustrated by the fact that although it represented the majority of the population, it could still be overruled by the other two estates. So, it split off on its own and started the National Assembly, swearing to not separate until a new constitution was written.

As members of the other two estates moved to the National Assembly, Louis XVI gave his grudging approval. But he also started moving several military regimens into Paris, sparking fears he would try to break up the assembly by force.

Unrest broke out in the streets of Paris on July 12 after Louis XVI fired a popular, non-noble minister. Crowds went in search of arms and food, and two days later, finding muskets and cannons at a military hospital, set their sights for the gunpowder stores at the Bastille.

The governor of the Bastille invited some revolutionists inside for negotiations, but the crowd outside grew restless, scaled the outer wall and opened the drawbridge to let everyone in, resulting in a battle. Some 100 revolutionists died that day, but the Bastille fell when sympathetic French guards blasted the fortress with cannons. After the storming of the Bastille, the prison was dismantled.

Bastille Day has been a public holiday in France since 1880. The French remembered the storming of the Bastille with la fête nationale, the national celebration. And the annual event became known simply as le quatorze juillet, July 14.