Companies Spend Millions On Super Bowl Ads. Are They Worth It? 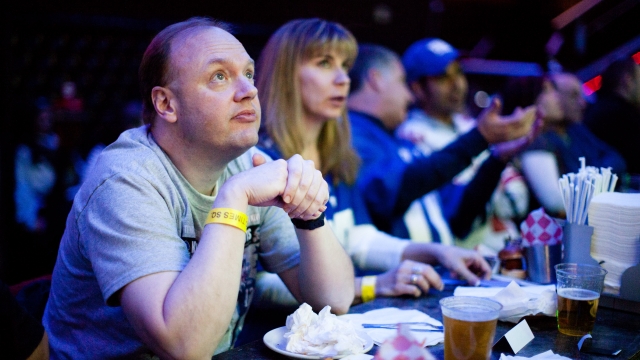 SMS
Companies Spend Millions On Super Bowl Ads. Are They Worth It?
By Newsy Staff
By Newsy Staff
February 10, 2022
A new Ipsos poll conducted for Newsy finds more than 36% of respondents are more excited for Super Bowl commercials than the game itself.

Some folks watch the Super Bowl for the commercials. Others tune in to see Dr. Dre and friends at the halftime show, while others would watch just about any football matchup they could get.

New data tells us that split is a broader trend, but that a few more people might actually be paying more attention to the commercials than the game.

With those much-anticipated commercials comes the chance to see some iconic ads.

For decades now, Super Bowls have been prime advertising real estate, with 30 seconds of ad time for this year's game going for as much as $7 million.

But not every company sees the value in paying so much to showcase new ads — even companies with a history of advertising in the big game.

Coca-Cola is sitting on the sidelines for the second year in a row while rival Pepsi is sponsoring the halftime show. State Farm also opted out after airing its first Super Bowl ad last year; this year it's putting its money towards a Super Bowl ad campaign for TikTok, not TV.

That opportunity to seize on the online buzz around the Super Bowl even leads to some of the game day ads dropping days before the actual game.

Linli Xu, a marketing professor at the University of Minnesota, has done research into how effective Super Bowl advertising is at generating word-of-mouth buzz for companies.

"Some companies do this teaser, like a movie trailer, after ads for those Super Bowl spots," Xu said. "I think those are the tactics that companies use to keep the viewers engaged."

So, why do companies do this? Super Bowl ads, when done right, can be more iconic than the game itself.

Think about it. Your company gets to market to 100 million people, you have a video that can go viral even before the game and TV shows and websites will run your ads afterward because of the buzz they generate. Plus, you have a chance to define your brand.

"A lot of people watch the game for the commercials, and so it's a very high interest moment in television so that if you're an advertiser, not only you're going to get 100 million eyeballs, but you're going to get them paying attention to your ad," Steve McKee, co-founder of advertising agency McKee Wallwork, said. "That's just unheard of in this day and age."

McKee is also the creator of Adbowl, an early online tracker of how viewers respond to Super Bowl ads that let viewers rate their favorites for nearly 20 years.

Based on the feedback he saw in his years running Adbowl, he offered an interesting comparison to explain what makes a good Super Bowl ad.

It's as important as ever now, with advertisers working to make sure they read the room properly in light of the recent surge of the Omicron variant of COVID-19. Some advertisers are even shooting alternate endings for their commercials to be ready to respond to fast-moving events.

Ads are even a huge opportunity for companies in trouble to re-establish themselves. Chrysler did this with ads in the early 2010s after it emerged from bankruptcy and the auto industry bailouts.

The thing is, it's a big gamble for companies, since the massive investment doesn't guarantee any long-term buzz.

"It only lasts like a few days, and then I revert back to the kind of the baseline before the Super Bowl," Xu said. "So basically, I think even for the biggest sporting event, Super Bowl, where people do see there are a lot of buzz and conversations generated by those commercials, Super Bowl commercials, but that impact, it's actually quite short lived."

It's really about what you do afterward with that buzz, so it doesn't always mean success. Back in 2000, the game was dubbed the "dot-com Super Bowl" after 20% of the ads went to dot-com companies. That exposure didn't save a lot of those companies from some other bad financial decision-making in the industry. After the dot-com bubble burst later that year, every company that advertised saw their value drop, with only three coming back to advertise the following year.

"Along comes the internet in the mid to late 1990s and the dot com boom, where all these new dot.com companies were getting huge amounts of venture capital investment," McKee said. "So several of these companies thought, 'Well, what better thing to do with all the money we have than to run a Super Bowl commercial?' And for some, it worked out pretty well, and for some they became sort of a joke and a byword because they were running commercials where you didn't even know what they were about."

Another new industry is making its first big step toward Super Bowl ads in 2022. Cryptocurrency businesses and marketplaces have been on the upswing in the past year, although the recent large drops in cryptocurrency values have put a dent in those gains.

But large exchanges, including FTX and Crypto.com, have poured millions into ads viewers will see Sunday.