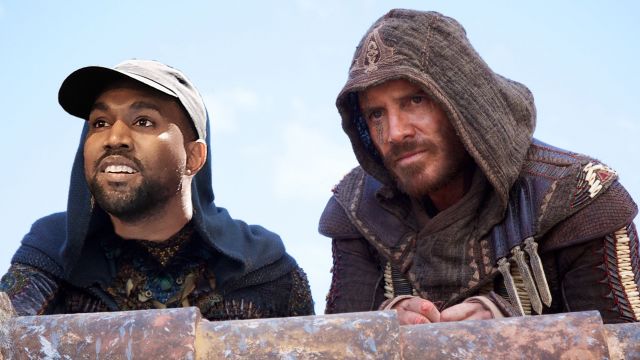 SMS
What's Kanye West's Music Doing In The New 'Assassin's Creed' Trailer?
By Matt Picht
By Matt Picht
May 12, 2016
The first trailer for Michael Fassbender's 15th-century murder spree is scored to Kanye's "I Am a God." Subtle.
SHOW TRANSCRIPT

So the new trailer for "Assassin's Creed" actually looks all right: It's got Michael Fassbender, wrist blades, medieval parkour and a neck-snapping dive off a really tall tower. Oh, and Kanye West is around, too.

The thudding bass line from West's "I Am a God" does nicely underscore the franchise's gritty action scenes. It's also indicative of the type of talent Hollywood's willing to throw at its latest attempt to successfully bring a beloved video game franchise to the silver screen.

Still, many fans thought the song was a jarring anachronism in a movie set during the Spanish Inquisition. Edits of the trailer started popping up soon after its release, replacing Yeezy with some of the orchestral music from the original games or with songs from other pop artists.

Out-of-place trailer music isn't exactly uncommon in video games. "Assassin's Creed" has even been a prime offender in the past.

And until 50 Cent gets that "Saints Row" movie he promised us off the ground, this is probably Kanye's best chance at being part of a video game movie.